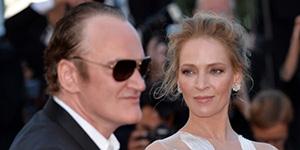 “As a director, you learn things and sometimes you learn them through horrendous mistakes.”

Quentin Tarantino says Uma Thurman’s violent car crash on the set of his 2003 film “Kill Bill” was “the biggest regret” of his life.

The actress mentioned the wreck, which she says resulted in permanent damage to her neck and knees, in an interview published Saturday in The New York Times. The article largely focused on Thurman’s sexual assault allegations against Harvey Weinstein, but she also discussed her experience with Tarantino filming “Kill Bill,” which was produced by Weinstein’s studio.

Thurman accused Tarantino of forcing her to drive a car she didn’t feel comfortable operating in one shot. After eventually agreeing to do it, she accidentally crashed and had to be taken to a hospital.

Tarantino, in an interview with Deadline published Monday, admitted he pressured Thurman to do the scene. He said he believed at the time that it was “safe.”

“It’s the biggest regret of my life, getting her to do that stunt,” Tarantino told Deadline. “As a director, you learn things and sometimes you learn them through horrendous mistakes. That was one of my most horrendous mistakes, that I didn’t take the time to run the road, one more time, just to see what I would see.”

He continued: “Me and Uma had our issues about the crash. She blamed me for the crash and she had a right to blame me for the crash. I didn’t mean to do it. I talked her into getting in the car, I assured her the road was safe. And it wasn’t.”

Thurman accepts Tarantino’s apology, according to a post she published Monday on Instagram. But she’s still going after Weinstein and his fellow “Kill Bill” producers Lawrence Bender and E. Bennett Walsh, saying they covered up the crash.

“They lied, destroyed evidence, and continue to lie about the permanent harm they caused and then chose to suppress,” Thurman wrote. “The cover up did have malicious intent, and shame on these three for all eternity.”

Thurman told the Times that Miramax, owned by Weinstein at the time, refused to show her footage of the wreck two weeks after it happened unless she signed a document “releasing them of any consequences of [her] future pain and suffering.”

“Something else Uma was misunderstood about [in the Times’ article], and I don’t think she realized it until last night while we were talking, was she feels that a whole cover-up happened,” Tarantino told Deadline. “She feels it’s very possible the car was destroyed, at Harvey Weinstein’s insistence, and at Bennett Walsh and Lawrence Bender’s execution.”

A spokesperson for Weinstein denied Thurman’s accusations of a cover-up.

“Harvey has tremendous affection for Uma Thurman nevertheless he denies these allegations,” the spokesperson said in a statement to HuffPost. “He did not give instructions to destroy the vehicle or orchestrate a cover-up and this is the first time he has learned that Ms. Thurman had any issues regarding the handling of her accident.

“We understand that members of the production team have stated to individuals in the media that Mr. Weinstein had nothing to do with the aftermath of the crash,” the statement continued. “Mr. Weinstein wishes Ms. Thurman would have spoken to him at the time to express her concerns and would like for her to provide any additional details so that he can assist in closing and repairing this chapter of her life.”

Representatives for Bender and Walsh did not immediately respond to HuffPost’s requests for comment.

Following the Times’ interview with Thurman, many media outlets emphasized her experiences with Tarantino over her allegations against Weinstein. An excerpt about Tarantino choking Thurman and spitting on her while filming “Kill Bill” scenes sparked outrage on the internet. But Tarantino defended his actions, saying he performed those scenes himself because he knew what he wanted as the director.

“For some reason there is a lot of hay being made out of this. Which I don’t understand, at all,” Tarantino told Deadline. “I can explain why I did exactly what I did, but my question is, what’s the fucking problem?”

“Naturally, I did it,” he said of spitting on Thurman. “Who else should do it?”