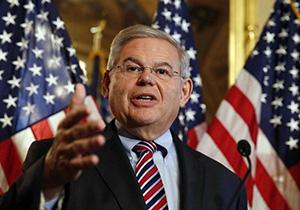 Senator Robert Menendez has been a vocal critic of the Iran nuclear deal.

WASHINGTON – A shuffle in Democratic leadership on the Senate Foreign Relations Committee may change the course of negotiations among lawmakers and the Trump administration on the Iran nuclear deal, as the president presses for legislation that would “fix” his concerns with the accord.

After surviving a federal corruption probe, Sen. Bob Menendez of New Jersey will take back the reins of the committee’s ranking committee chair from Sen. Ben Cardin of Maryland. Both men disapproved of the agreement when it reached Congress for a vote in 2015, but Menendez, in particular, has been a vocal critic on the Democratic side.

He is seen as closely tied to Israel advocacy groups in the US – especially the American Israel Public Affairs Committee, whose former president, David Steiner, generously contributed to his legal defense. In its fight to preserve the nuclear deal on Capitol Hill, the Obama administration accused Menendez in 2015 of taking directives from AIPAC.

Menendez was also the only Democrat on the committee to vote in support of David Friedman as Trump’s pick for ambassador to Israel.

But Menendez has been an Iran hawk for years. And recently he has distinguished himself from the formal positions of the Israeli government, calling Trump’s decision not to “certify” Iran’s compliance to the nuclear deal under US law a reckless move “more about campaign promises and less about our national security interests.”

“Not certifying now does nothing but create uncertainty among our allies and embolden an already belligerent Iran,” Menendez said in October.

“Instead of alienating our allies, the president should be leveraging certification to get their commitment to join our efforts to more robustly counter the Iranian regime’s indisputably nefarious behavior.”

That is the balance that US Secretary of State Rex Tillerson hopes to strike as he enters negotiations with Britain, France and Germany over paths forward. The administration hopes to secure an addendum agreement, between the US and EU, that would add terms to the accord without having to renegotiate with Iran.

Trump has warned that failure to secure guarantees from European powers by May would result in his full withdrawal from the nuclear pact.

The White House wants Congress to pass legislation that will amend the Iran Nuclear Agreement Review Act of 2015 – a move that will require agreement between the Senate Foreign Relations Committee chairman, Bob Corker of Tennessee, and its ranking member, now Menendez.