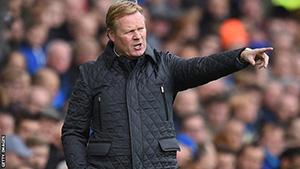 Former Everton manager Ronald Koeman has been appointed as manager of the Netherlands.

Koeman, who has been out of work since being sacked by Everton in October, will take charge for the first time against England on 23 March.

He has signed a four-and-half-year contract up to and including the 2022 World Cup.

The 54-year-old replaces Dick Advocaat who resigned after failing to guide the Netherlands to the 2018 World Cup.

“I’m really positive about the future of the team. We have enough talent but we have to change some things, which I will talk about at a later stage,” Koeman said at a news conference.

A legend with the Netherlands national team, Koeman was capped 78 times as a player and won the European Championship in 1988.

He was sacked by Everton with the team 18th in the Premier League, having won just two of their nine league games this season despite spending £140m last summer.

He guided Everton to seventh place in his first season in charge last term and also took Southampton to sixth and seventh in the Premier League in his two years in charge at St Mary’s.

The Netherlands were runners-up at the 2010 World Cup and finished third in 2014 in Brazil but failed to qualify for Euro 2016 and this summer’s World Cup.

“I think the Netherlands should and must be qualifying for major finals and I see a bright future in that regard. That’s why I’ve taken the job,” Koeman said.