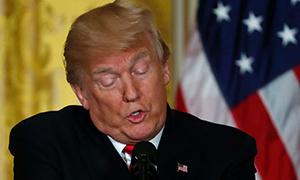 President Donald Trump has said Tuesday he would love to see a government shutdown by Thursday night in an attempt to force Congress to make an immigration deal, but the White House stressed they are not advocating for another political gridlock.

“We are not advocating for the shutdown, that’s the fault of the Democrats not being able to do their jobs,” White House Press Secretary Sarah Huckabee Sanders said. “The president wants a long-term deal and he wants a deal on immigration and he hopes Democrats will come to the table and get that done.”

Moments earlier, the president said that “if we don’t change [immigration legislation] let’s have a shutdown. We’ll do a shutdown, and it’s worth for our country.”  He was addressing a group of law enforcement officials who sat down with Trump at the White House to talk about Latino gang MS-13, Bloomberg reported.

Trump went on to say that the current immigration legislation contains “loopholes where killers are allowed to come into this country and continue to kill.” But Representative Barbara Comstock, a Republican from Virginia who attended the meeting, told the president a shutdown would not be necessary because there is bipartisan support to curb gangs.

“I think both sides have learned that a government shutdown was bad,” Comstock said. “It wasn’t good for them, and we do bipartisan support on these things.”

On Tuesday, Republican and Democratic senators announced that they were working together to seal a two-year budget deal, even though immigration reform is not included, according to The Hill. Lawmakers must agree by March 5 to extend protection for young immigrants brought into the U.S. as children, the publication added.

White House Chief of Staff John Kelly said Trump would unlikely extend the March 5 deadline for DREAMers who hope to renew their legal protection and work permits. “I doubt very much,” he told reporters, adding that he was “not so sure this president has the authority to extend it.”

Earlier today, Kelly talked to a group of lawmakers about the president’s plan to offer a path to citizenship for nearly 690,000 DREAMers under the Deferred Action for Childhood Arrivals program (DACA). He said the president’s initiative was generous because it would help undocumented immigrants “who may have been too afraid to sign up or were too lazy to get off their asses,” according to The Washington Post.

Kelly’s comments ignited a social media firestorm. CNN contributor Ana Navarro tweeted, “Enough w/ bashing immigrants. In order to qualify as Dreamers, young people must be in school, or hold jobs. Almost 1,000 of them serve in the military. They’re often the primary breadwinners for their family, despite living in fear & legal limbo. They’re anything but lazy. Enough!”

Juan Escalante, a communications manager for immigration reform group America’s Voice, said in a tweet: “ John Kelly should try: working 40 hrs. a week, talking 21 college credits in one semester, fighting for the Dream Act, helping out your family financially, dealing with deportation fear/anxiety. AT THE SAME TIME (and succeeding) before calling Dreamers lazy. Do your job.”

Immigration lawyer Mana Yegani said in a tweet that “Kelly says Dreamers were too lazy to apply. That’s not true. DACA restricted a lot of Dreamers by age and date. Many Dreamers didn’t meet the requirements to apply. Ignorant comment from Kelly. Period.”

Last month, the federal government briefly shut down after Democrats refused to support a funding deal that did not include DACA recipients.