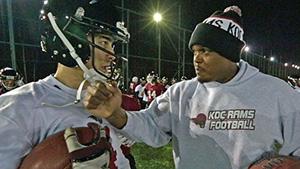 On a darkened field in Istanbul, Turks and Americans are lunging at each other.

As one powerhouse rushes forward, a burly opponent comes in for a tackle: the Turk flooring the American.

But as the Koç Rams American Football team enjoy their weekly practice, the rivalry is amicable – unlike that between their two countries.

The relationship between Turkey and the United States is in deep crisis.

From Syria to human rights, foreign policy to the 2016 attempted Turkish coup, the disputes between the two seem endless.

They even suspended the granting of visas to each other last year: a new low in bilateral relations.

“For me personally it creates some anxiety,” says John Booker, the American coach of Koç Rams.

“The leaders of both countries have quick triggers in terms of temperament, as shown by the visa ban, so when you have two individuals like that you can’t predict what’s going to happen tomorrow or the next day. If things get really bad, I can always go home.”

In the past month, ties have neared breaking-point.

In a new offensive, Turkey is bombing Kurdish fighters in Syria who were armed by the United States.

Ankara sees them as terrorists, linked to outlawed Kurdish militants who have waged a bloody insurgency within Turkey since the 1980s.

For Washington, they are partners on the ground against the Islamic State (IS) group.

The risk of a direct military clash between Nato’s two largest armies is growing.

“We don’t have a problem with the United States,” says Volkan Bozkir, an MP with the governing AK Party and chairman of the Foreign Affairs Committee.

“We have suffered together, fought together and striven for peace and stability together.

“But if we have lost thirty thousand lives because of a terrorist organisation and we look at the US and it’s given ammunition, expertise, American soldiers are training them… this is the point we must start from and then repair the confidence lost between the two states.”

But the mistrust goes deeper, to a Turkish cleric that Ankara blames for orchestrating the 2016 attempted coup here and who lives in the United States.

Fethullah Gülen, an ally-turned-arch foe of President Recep Tayyip Erdogan, is said by the Turkish government to lead a cult whose followers infiltrated every organ of the Turkish state.

Turkey has requested his extradition from the US, where he has lived in self-imposed exile since 1999.

Washington says the courts will decide – but it is looking increasingly unlikely that alleged evidence submitted by Turkey has proven Mr Gulen’s direct complicity.

Amidst the row and Turkey’s anger over what it saw as a lack of US solidarity after the coup attempt, some local staff at US diplomatic missions in Turkey were detained on seemingly baseless evidence of their involvement in the coup.

The US was enraged and cut the provision of visas to Turkish nationals. Turkey retaliated with the same move. It was only resolved weeks later.

An American pastor remains in custody here on similarly dubious charges, in what looks like Turkey’s attempt at “hostage diplomacy”.

Then there was the violent brawl involving President Erdogan’s security team as he visited Washington, an apparent symptom of his repressive tendencies.

Then there was Turkey’s furious reaction to President Donald Trump’s declaration of Jerusalem as the Israeli capital.

Then came reports that the US would form a new border force in Syria comprising mainly Kurdish fighters, which incensed Ankara… the list goes on.

Pro-government media hammers home the message on a regular basis, one recent editorial screaming that the US is Turkey’s new enemy and that people should besiege the US military base here.

A recent poll suggested that two-thirds of Turks see the US as their biggest threat.

“The relationship is probably the worst since 1974 – since the Cyprus crisis,” says Unal Cevikoz, a former Turkish ambassador to London.

“It matters because Turkey is in a neighbourhood where we have so many problems and they all have repercussions for Europe. The new members of Nato and the EU are concerned about Russian advances in Ukraine and Crimea. Nato needs solidarity – and that depends on good relations between Turkey and the United States.”

It has left Turkish students Arda Hurbas and Idil Cakmur anxious as they prepare for university in the US.

Over piping-hot tea in an Istanbul café, they reflect on their situation, caught up in a wider conflict.

“I’m most concerned about my family,” says Arda, recalling the visa suspension. “If the situation with the United States gets worse, they won’t be able to come and visit me.”

“When you go to a more eastern part of Turkey and say you’re going to study in the US, they don’t like it, they think you’re betraying your country,” says Idil. “That’s what worries me more than the actual relationship between Turkey and the US; it’s how the United States issue has become another way of polarising people here.”

Joining Nato in 1952 anchored Turkey to the West. Thirteen years ago, it started negotiations to join the European Union.

But as relations with both have deteriorated, Turkey has realigned itself, towards Russia and some Middle Eastern neighbours, which don’t criticise the plummeting state of democracy here.

And that is serious. In trade, security and military might, Turkey is too important for the West to lose.