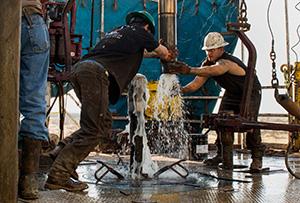 By Sheela Tobben and Wael Mahdi

U.S. oil headed to the Middle East in December, an unthinkable trip just a few years ago.

The United Arab Emirates purchased condensate from the U.S. in December, according to a person with direct knowledge of the matter who asked not to be named because he isn’t authorized to speak to media. The cargo will be used to meet requirements for its condensate splitters, the person said, adding that it preferred to buy the oil from the U.S. because it has superior quality to that sourced from the region.

“As a member of OPEC and a large crude producer, I would imagine they would be very self-sufficient in their own crude supply,” said Andy Lipow, president of Lipow Oil Associates. The purchases of U.S. oil aren’t likely to continue, given the U.A.E.’s own supply, Lipow said.

A shipment of American oil to the Middle East is the latest sign of how the shale boom and the lifting of a ban on U.S. exports has changed the flow of petroleum around the world. U.S. production is expected to grow by 2 million barrels a day between February 2017 and November this year, according to the Energy Information Administration. Exports have increased from a little more than 100,000 barrels a day in 2013 to 1.53 million in November.

The U.S. exported about 700,000 barrels of light domestic crude in December to the U.A.E., the Census Bureau reported Tuesday. It’s the fourth-largest OPEC producer’s first cargo of U.S. oil, according to EIA data. The Middle Eastern country typically brings in extra-light oil, known as condensate, to process in a unit known as a splitter.

U.A.E. crude production was 2.85 million barrels a day in January, according to data compiled by Bloomberg. Output has declined from 3.07 million at the end of 2016 as OPEC and allies cut production to reduce a global glut and prop up prices. Brent crude rose 0.8 percent to $67.37 a barrel by 10:13 a.m. in Dubai.

The cargo was shipped from Enterprise Products Partners LP’s Houston terminal on the tanker Seoul Spirit, which arrived Jan. 31 at the Port of Ruwais in Abu Dhabi, according to ship tracking data compiled by Bloomberg.

Until last year, the U.A.E. relied on Qatar for its condensate supply. But the two countries are embroiled in a political dispute, and the U.A.E. decided in June to ban all petroleum ships from Qatar. Brent crude prices