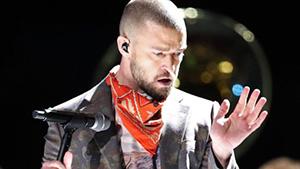 This should have been a triumphant week for Justin Timberlake.

His fifth album Man of the Woods – billed as a return to the singer’s Tennessee roots – came out on Friday, and he played the Super Bowl Half Time Show two days later, making him the only artist to grace the coveted stage three times.

But both the record and his performance have been savaged by critics. Here’s a sample of the comments.

On Man of the Woods:

On his Super Bowl performance:

Timberlake must be wondering what went wrong. Because, truth be told, there’s nothing egregiously bad about either Man of the Woods or his Super Bowl performance. They’re just… slightly disappointing.

The backlash feels bigger than a commentary on his music. There’s a mockery and a cruelty that feels personal – as though people had a lingering resentment towards the star, and they’ve suddenly been given licence to express it.

For some, it goes back to his relationship with Britney Spears. After they broke up, he made music and videos that traded on their story and told several interviewers he’d taken her virginity – a personal detail that wasn’t his to share.

For others, it’s about his failure to support Janet Jackson after exposing her breast to millions of TV viewers at the 2004 Super Bowl.

Timberlake’s half-hearted acknowledgement of that moment at this year’s show did not go unnoticed.

“He chose to perform the song Rock Your Body, during which the famous wardrobe malfunction took place, and yet he didn’t mention Janet: He didn’t shout her out, and he stopped the song right before the line during which he ripped off her costume,” pop critic Ann Powers told NPR.

“It was almost like he was trying to erase what had happened in the past, but that is just not flying in 2018.”

“The Super Bowl performance invited people to reflect on the time Justin threw Janet Jackson under a bus, and what that said about race and gender,” agrees Peter Robinson, editor of Popjustice.

Timberlake has also been criticised for his fumbled response to the #TimesUp movement.

He starred in Woody Allen’s latest film, Wonder Wheel, but appeared not to consider the moral implications of working with the director, who has been accused of sexual abuse by his adopted daughter.

“I chose to not get into it,” he told The Hollywood Reporter. “I really don’t dive into any of that stuff with anybody.”

He later appeared at the Golden Globes wearing a Time’s Up badge, but appeared to miss the point of the movement, sharing a picture of himself and his wife Jessica Biel captioned: “DAMN, my wife is hot! #TIMESUP #whywewearblack”

“He’s spectacularly misjudged this comeback in a lot of different ways,” says Laura Snapes, deputy music editor at The Guardian.

“It’s a terrible mess of things to do with racial signifiers and gender signifiers.

“At this point in time, we’re expecting pop stars to be spokespeople on a certain level, and he’s definitely not living up to that.”

It has become “impossible to discuss contemporary pop culture” without weighing such concerns as “racial, cultural, sexual, and gender identities”, she argued. And what’s more, we expect our artists to reflect that conversation.

It’s a theme that derailed Katy Perry’s album campaign last year – after making a gesture towards political activism on the single Chained To The Rhythm, she retreated to familiar territory with Bon Appetit, a cartoonish ode to oral sex.

“It’s interesting how Katy was demolished for trying to be woke and Justin’s being criticised for not trying at all,” says Peter Robinson.

“In each of those cases, there’s been a pack mentality in the media – once they sense blood, it’s open season, and so for every pertinent article there end up being 20 that just exist for clicks, or as an exercise in young writers demolishing a previous generation’s pop icons.

“What’s also been true of both Justin and Katy is that their albums simply haven’t been up to scratch, so there’s an escalating cycle of politics being an excuse to attack a bad album, and a bad album being a reason to attack politics.”

And that’s really the crux of it.

“I think if the music was good, it would override any of those ideological problems people have with it,” says Snapes.

Indeed, Ed Sheeran and Bruno Mars seem to be doing pretty well for themselves with music that has very little to say outside of “I like making songs” and “hey, ladies, how about getting undressed?”

But, crucially, they don’t pretend to be saying anything profound. Timberlake, on the other hand, launched his album with an unintentionally hilarious trailer in which he dramatically walks through corn fields in a flannel shirt, while a female voice-over declares: “It’s like Wild West but now”.

“It was like a cologne advert,” says Laura Snapes. “And it was a mistake for him to release that before there was any music, because it instantly made people think he was pivoting to whiteness.

“It seemed like a very convenient thing to go for in Trump’s America – to abandon the signifiers of black music you’ve carried with you throughout your career.

“It was tasteless and ridiculous and plays on these outdated ideas of the strong man in the West.”

Peter Robinson agrees: “There really hasn’t been a worse time in pop history for someone to expect widespread applause for delivering a mediocre celebration of supposed manliness.

“Man of the Woods is precisely what happens when a pop star’s favourite pastime is golf.”

And, yet, Timberlake doesn’t appear to have been unduly damaged by his critical mauling.

Man of the Woods looks like it will enter the UK chart at number two on Friday, and streams of his music jumped dramatically following the Super Bowl. According to YouTube, fans streamed half a million Justin Timberlake videos in the hour immediately after his performance.

Is it possible that, despite thousands of think-pieces (including this one), fans don’t fire up Spotify and choose what to play based on the artist’s level of “wokeness”?

“So I don’t think this critical backlash will decimate Justin’s career, but it’s important that journalism holds artists to account.”