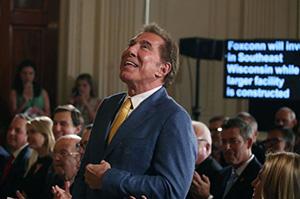 By Daniela Wei and Christopher Palmeri

Steve Wynn, the casino billionaire credited with shifting the industry’s focus from gambling to all-around entertainment, stepped down as chief executive officer and chairman of Wynn Resorts Ltd. after being embroiled in a sexual harassment scandal.

The board “reluctantly” accepted Wynn’s resignation, the company said in a statement. Wynn Resorts appointed Matt Maddox, currently president, as its CEO effective immediately. Steve Wynn alone made the decision to step down, according to a person familiar with the matter. The gaming magnate will also resign from his chairman role at the Macau unit.

“In the last couple of weeks, I have found myself the focus of an avalanche of negative publicity,” Wynn said in the statement. “As I have reflected upon the environment this has created — one in which a rush to judgment takes precedence over everything else, including the facts — I have reached the conclusion I cannot continue to be effective in my current roles.”

Wynn, who has been in the spotlight since the Wall Street Journal published a report Jan. 26 that alleged he pressured employees for sex and paid a $7.5 million settlement, is among one of the highest-profile casualties of the public backlash against sex harassment. Wynn, 76, has denied any wrongdoing.

The billionaire joins a list of powerful men, from Hollywood heavyweight Harvey Weinstein to U.S. Senator Al Franken, whose careers have been derailed by women coming forward with allegations of sexual misconduct. The movement, known as #MeToo as a way for women to share their harassment experiences online, has led to a reckoning in the entertainment industry, forcing Hollywood studios and agencies to purge big stars and high-ranking executives.

Wynn’s exit sets up a challenge for a company whose glamorous image has been closely tied to its founder. As recently as Tuesday night, callers to his Las Vegas hotel heard his voice, extolling the virtues of a Jeff Koons sculpture of Popeye on the property, when they were placed on hold.

There are no plans to change the name of the casino company despite Wynn’s departure, said the person, who asked not to be identified discussing private information. Wynn still lives on Wynn Resorts’ Las Vegas property in a villa he rents, the person said.

The resignation puts Maddox, 42, at the helm of a company where he was seen as Wynn’s right-hand man. In his 16-year career at Wynn, Maddox served as chief financial officer and held a range of management roles at the company before working up to becoming president in 2013. Maddox worked at Caesars Entertainment and as an investment banker before joining Wynn.

While he’ll no longer run the company, Wynn remains in control of about 21 percent of Wynn Resorts through his own holdings and the stake held by his ex-wife, Elaine Wynn. That means he’ll remain the single most influential shareholder at Wynn, and regulators will still have cause to examine his behavior. The stake isn’t big enough to fend off a takeover or other major corporate changes if a majority of shareholders support them.

The company could be targeted by rival casino operators and private-equity firms, as well as Asian companies seeking to get a piece of Macau.

The fallout from the claims against Wynn has reverberated from Macau to Las Vegas. Macau regulators talked with Wynn Macau management last week to make sure major shareholders, directors and key employees meet suitable qualifications. Regulators in Nevada and Massachusetts are reviewing the allegations, and Wynn Resorts’ board launched its own investigation. Wynn Resorts shares have dropped 19 percent since the allegations surfaced.

Trading of the Macau unit’s shares was suspended Wednesday, pending “important” changes in directors and executive functions, according to an exchange statement.

As CEO of Wynn Resorts, Wynn was among the first operators to win a casino license in Macau, the largest gambling hub in the world. His casinos in the U.S. and Asia are some of the highest-grossing in the business, with a focus on entertainment, food and high-end customers — a formula now widely imitated by rivals.

Wynn’s flamboyant hotel designs helped America’s gambling mecca quadruple its visitor count over the past four decades, to 43 million annually even as competition spread across the country. In Macau, Wynn’s $4.2 billion casino draws in elite gamblers and has helped the company gain the most market share last year among casino operators.

Wynn Resorts, which first sold shares to the public in 2002, owned four casino hotels in December 2017: the Wynn Las Vegas and Encore in Las Vegas and Wynn Macau and Wynn Palace in China. Wynn has amassed a net worth of more than $3 billion, according to the Bloomberg Billionaires Index.

Wynn stepped down as Republican National Committee finance chair last month, while the University of Pennsylvania revoked an honorary degree given to him, the first time the Ivy League school has taken such an action in a century.