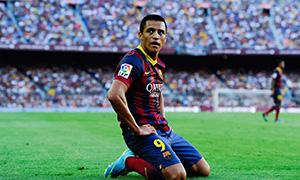 Alexis Sánchez’s agent has confirmed the Manchester United striker has accepted a prison sentence for tax fraud, but has described the agreement as “entirely unjust” and attacked the Spanish authorities for effectively forcing him and other players into signing the deal. He says other players have been obliged to do much the same.

Fernando Felicevich has accused the state of changing its interpretation of the law and pursuing professional footballers, particularly foreigners, exercising pressure through “obscene” leaks to the media and the threat of long legal processes and prison sentences.

Lionel Messi and Cristiano Ronaldo are just two of “infinite” numbers of players who have been charged, and Felicevich has insisted there will be more.

Reports appeared on Wednesday morning revealed Sánchez had agreed a deal with the state attorney, accepting the charges against him for allegedly defrauding the Spanish treasury of €1m while he was at Barcelona in 2012-13.

The state said he had used a company based in Malta to receive image rights paid by the Catalan club and Sánchez accepted the charges, agreeing to a 16-month prison sentence. He will repay the amount in full, plus interest. Because the sentence is less than two years, he will not serve any time in jail.

But far from admitting the agreement is a demonstration of Sánchez’s guilt, his agent said publicly what some tax specialists and lawyers have said privately, attacking the state and inland revenue for pursuing players with “unfair” charges they have little choice but to accept as a means of avoiding worse problems.

Those are charges, he alleges, which are founded upon a reinterpretation of the law and are forced through via underhand means.

“Once again, there has been a leak from the Spanish tax office, [this time] outlining an agreement between our client Alexis Sánchez and public prosecutors,” Felicevich said in a statement. “Despite having demonstrated that Alexis has committed no crime, we have been obliged, following the recommendations of our [legal] advisers, to accept the unjustified pact offered in order to palliate the emotional, personal and economic cost of long, tedious, trials where the media are used to publicly expose and judge private matters.”

Felicevich accused the state and the tax office of applying the same means of pressure against players across Spain. Lionel Messi was handed an initial 21-month sentence for fraud, while a number of other figures, including Javier Mascherano and José Mourinho, reached agreement with inland revenue and the state prosecutors’ office. Cristiano Ronaldo continues to fight charges against him, protesting his innocence, and his case is ongoing.

“Prosecutors and the tax office have put more than 30 players in the same situation, accusing them of the same crimes and threatening them with effective prison sentences,” Felicevich said. “Almost the entire squad at Real Madrid and FC Barcelona have been put in this situation, as the clubs have used a means of paying tax that was accepted by the tax office in the past.

“The supposed crimes are the use of contracts that have been used for a long time by infinite numbers of players, in agreement and coordination with the most prestigious clubs in Spain and using a legitimate method of taxation that was tacitly and expressly accepted by inland revenue in the past.”

He added: “During all these processes, violating the rights of those investigated, continued, repeated and obscene leaks served as a means of exerting pressure to force players to accept agreements like the one that has been leaked today. In some cases, there is no choice but to bow to that pressure and, to avoid greater injustice, accept injustice like this. Many players and coaches have had to do this and many more will have to.

“Given the dreadful experiences suffered by Messi, Ronaldo, etc have had to suffer, we concluded that it was better to accept an unjust agreement but be able to turn the page and not to be subjected to political and media pressure.”