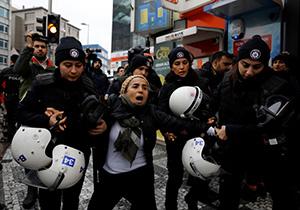 “Ensuring the security of its borders does not mean killing civilians, and that should be condemned. In a dangerous situation in Syria, [Turkey] should not add war to war.”

More than 136 civilians have been slaughtered in two days in eastern Ghouta near Damascus. “Scenes of entire buildings housing whole families crashing down with the residents,” a local told Al Jazeera.

Meanwhile in rebel-held Idlib, the largest air strikes in a year are pounding the province. The Assad regime is using the distraction of Turkey’s offensive in the Kurdish canton of Afrin to execute a carefully laid plan of attack on the opposition. Russia, a key ally of Syria’s regime, and Iran are also intimately involved.

According to a source familiar with situation in Idlib, “Russia has a plan in place to put the opposition in specific areas in Idlib. This area will be surrounded by Turkish observation posts.”

On January 20, Turkey began a major offensive in northern Syria against the Kurdish People’s Protection Units (YPG) which it accuses of being an off-shoot of the Kurdistan Workers Party. Ankara considers both groups terrorists. But the YPG has not only been a partner with the US-backed Syrian Democratic Forces in eastern Syria, it has also had a relatively amicable relationship with the Syrian regime. Prior to the Turkish offensive there were Russian observers in Afrin who had come from regime-held Aleppo. Trade and goods pass between the YPG and regime.

In January when Turkey decided to open its offensive it informed Russia and the US of its intentions. Moscow informed Damascus. Damascus threatened to shoot down Turkish warplanes if they flew into Syrian territory. But two days later the warplanes flew in and Syria’s air defenses sat silent. Sources say a deal was reached. The regime decided that it would watch the Turkish offensive unfold while it gathered forces to attack the rebels. According to reports around 25,000 Syrian rebels were mobilized to fight alongside Turkey in Afrin. Some of these are units such as Faylaq al-Sham, Nureddin Zengi (Nour al-Din al-Zenki), Sultan Murad that have fought alongside Turkey before in operations in 2016 and the fall of 2017.

The same day that Turkey and the rebels attacked Afrin, Syria attacked the rebels and took Abu al-Duhur military airport in Afrin. Led by Assad regime Brig.-Gen. Suheil al-Hassan, elite units as well as local armed tribes pushed the rebels back, according to a local source. The regime then conquered several hundred square kilometer of countryside.

Since mid-December the UN estimates 200,000 have fled fighting in Idlib. Now there are more Kurdish refugees seeking shelter in Afrin. This is troubling for Ankara, which has said it would like to have some of the 3.5 million Syrians living in Turkey go home and hoped the Afrin offensive could lead to gains that would allow that.

According to the knowledgeable source, “Assad has no command on operations any more. Russia comes first and Iran second in decision-making.”

The downing of a Russian Sukhoi- 25 jet over Idlib last Saturday complicates the situation. Hayat Tahrir al-Sham, formerly al-Qaida in Syria, claimed responsibility. The pilot’s corpse, his hands and face deformed, allegedly from taking his own life with a grenade to avoid capture, were broadcast by the extremists among the rebels. Turkey’s offensive seems to have slowed even as Turkish armored vehicles have deployed to observation points in Idlib. Syrian air defenses have been moved closer to the Idlib front. Tehran has called for Ankara to halt its offensive.

On Wednesday, France’s Foreign Minister Jean-Yves Le Drian accused Turkey, Iran and the Assad regime of violations of international law. “Ensuring the security of its borders does not mean killing civilians, and that should be condemned. In a dangerous situation in Syria, [Turkey] should not add war to war.”

The UN also called for a ceasefire on Wednesday.

All this leaves the regime with gains in northern Syria and new refugees, some fleeing the regime, and others fleeing the fighting in Afrin. It appears that once again Damascus has outplayed its rivals, allowing a conflict between Turkey and the YPG on its soil that it hopes will weaken both while it slowly takes more territory.