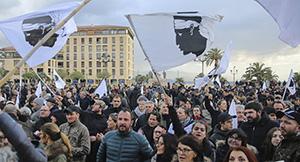 PARIS (Sputnik) – The Corsicans will keep up peaceful protests in search of greater autonomy from Paris despite the recent remarks by the French president, when he rejected most of the demands voiced by the region’s nationalists, the president of the Corsica Libera faction in the Corsican legislative body told Sputnik.

On Wednesday, French President Emmanuel Macron made a speech on the future of Corsica at the end of his trip to the island, refusing the nationalists’ proposal of local tax collection and the demand of an official status for the Corsican language.

“I doubt that Macron’s speech [will] result in the immediate capitulation of Corsicans. I don’t believe it for a second. There will be new protests, peaceful, democratic, but determined,” Pierre-Antoine Tomasi said.

In his speech, Macron agreed that Corsica should be mentioned in the French Constitution, something which would help recognize its “identity.” The French president also pledged to start fighting crime, and improving health care and cell phone coverage in the region. However, he rejected the nationalists’ demand to institute a special “resident status” so that the property on the island could be sold only to its inhabitants.

Tomasi noted that France in Corsica was “playing a game dangerous for itself” and cited the example of the Catalans, whose independence claims, minor back in the 2000s, had been boosted by the central government’s reluctance to heed their requests for more autonomy, which resulted in a political conflict.

“One of the consequences [of Paris’ current policy] could be seeing the aspiration of sovereignty increase, like it was in Barcelona. So clearly if France keeps in mind what’s going on in Catalonia now, it has to have a clear vision of what happened through these past 10 years and why,” Tomasi said.

Corsica has been pushing for greater autonomy from France for decades. The latest protests were held in the capital of Ajaccio on Saturday, when thousands rallied ahead of Macron’s visit.

Last December, the nationalists’ position was solidified at the level of regional legislature by a strong performance at the local elections, when lawmakers from the Pe a Corsica party gained 41 seats in the 63-seat of the Corsican Assembly.