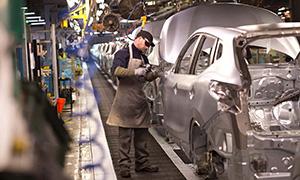 Leave-voting heartlands of north-east and West Midlands would be worst hit, report finds

A no-deal Brexit would blow an £80bn hole in the public finances, with the leave-voting heartlands of north-east England and West Midlands worst affected, according to new detail from the government’s own secret economic analysis.

The Guardian has learned that the secret papers, which assess the economic impact of leaving the bloc, predict that if there is no deal, the government will need to borrow £120bn more over the next 15 years.

The report suggests that the north-east would face a 16% hit to regional economic growth, and the West Midlands 13%. And it claims that a hard Brexit would mean an overall 21% rise in retail prices, with a 17% rise in food and drink costs.

The additional borrowing costs would be mitigated by £40bn of gains from leaving the EU, including £11bn in saved payments, leaving £80bn in net costs. Of this, £55bn can be put down to the impact of non-tariff barriers, which could include regulatory divergence or quotas.

However, one source who has seen the original documents cast doubt on the projected £40bn gains, which they said had been calculated by estimating the potential benefits of slashing regulation, including on the environment, which the government has said it will not do.

The revelations came as Theresa May’s 11-strong Brexit inner cabinet held the first of two meetings on successive days to thrash out a series of key issues. However, senior government sources said the first gathering, intended to discuss the Northern Ireland border situation, had made little progress.

On Thursday the same committee, comprising May and most of her senior ministers, among them Philip Hammond, Amber Rudd, Boris Johnson, Michael Gove and Gavin Williamson, was expected to discuss a future trade relationship with the EU.

The detail of the studies comes after the papers were leaked to Buzzfeed last week. The analyses found Brexit would leave the UK worse off under three possible scenarios: a comprehensive free trade deal, single market access and no deal at all.

The document was meant to be shown confidentially to cabinet ministers but the Commons Speaker, John Bercow, ordered its release to MPs last week after Labour won a Commons vote on the issue. MPs are now able to view the documents in a confidential reading room.

MPs who have seen the documents said they showed every region of the UK would be affected negatively whatever the deal.

The report shows the north-east would lose 16% of regional economic growth, the West Midlands 13%, and the north-west and Northern Ireland 12%. London, where 60% of the population voted to remain, will be the least affected by leaving the EU whatever deal is eventually reached, the report said.

Northern Ireland would be the third worst affected, but the studies did not model the impact of a hard border, one source who has seen the paper told the Guardian.

The question of how to avoid a hard border in the region was among the subjects of the two-hour Brexit subcommittee meeting, but senior government sources said little movement had been achieved.

Hammond, the chancellor, reportedly sparked concern among pro-Brexit colleagues at the meeting by urging them to agree to all of the EU27’s demands on a transitional period, in order to get a deal finalised as quickly as possible and reassure businesses.

The former Lib Dem leader Tim Farron, a supporter of the pro-remain campaign Best for Britain, said: “Project Fear has just become Project Colossal Understatement. These are the government’s own figures and in every respect they depict a weaker, poorer Britain where those regions that voted most heavily to leave are those that will suffer the most. Britain has been badly betrayed by Mrs May. No one voted for this mess.”

The south-west, Yorkshire and the south-east are judged to be the least likely to be affected, as well as the capital. Scotland faces a reduction in regional economic growth of up to 9% under a no-deal outcome, reduced to a loss of 2.5% if the UK stays in the European Economic Area.

The SNP MP Peter Grant said the figures made for “utterly grim reading” and the government should now publish the paper in full. “The leak underlines the case that remaining in the single market and customs union is the only way to minimise that economic harm,” he said.

The Liberal Democrat Brexit spokesman, Tom Brake, said it was striking how the two regions predicted to suffer most from all projected scenarios were ones that voted most heavily for Brexit. “Now the facts are known, the people are entitled to a vote on the deal and a chance to exit from Brexit,” he said.

Labour’s Stephen Doughty, a supporter of the pro-single-market Open Britain campaign, said: “It is utterly shameful that people all across this country are having to rely on leaks to find out how much damage a hard, destructive Brexit will do to their local economies and the country as a whole.”

The document also projects prices would soar because of non-tariff barriers if talks were to break down with the EU, resulting in a no-deal scenario.

The report is understood to predict an additional 21% rise in retail prices, an 18% rise in agricultural costs, a 17% rise in food and drink costs and 14% rise in motor vehicles and parts, over the 15 years post-Brexit. It predicts that if the UK were to trade under WTO terms, tariffs could mean food and drink prices increase by an additional 12.7%, sources said.

The analysis says the government could consider not retaliating with tariffs of its own in the event of a no-deal scenario, in order to keep prices down for UK consumers.

Farron, who is the Lib Dems’ environment spokesman, said that would be devastating for British farmers who would face being undercut. “If the government fails to get non-tariff access to Europe, it is actively planning to cave in and give European farmers free access to our market,” he said. “This will be a colossal blow to our farming industry and our countryside. They must be stopped.”

Sources said the document also analysed the impact of future trade deals, projecting that a free trade agreement with the US would mean just an 0.2% boost to GDP at best.

A government spokesperson said: “This document does not represent government policy and does not consider the outcome we are seeking in the negotiations.

“As ministers clearly set out in the House, this is provisional internal analysis, part of a broad ongoing programme of analysis, and further work is in progress.

“We are seeking an unprecedented, comprehensive and ambitious economic partnership – one that works for all parts of the UK. We are not expecting a no deal scenario.”