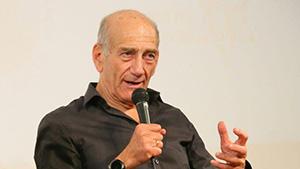 Former prime minister Ehud Olmert attacked current prime minister Benjamin Netanyahu in his first public appearance since being released from prison, saying the two haven’t been in touch since 2009. “I wish the prime minister to leave office quickly and appropriately,” Olmert quipped.

“I’m not exactly known for being taciturn,” Olmert added, “but I thought it would be proper and respectable to maintain silence and not jump at the opportunity (to respond).”

Speaking at a conference marking the 70th anniversary to the War of Independence battle of Latrun near Jerusalem at Tel Aviv’s Museum of the Jewish People at Beit Hatfutsot, Olmert also commented on the deal to free Gilad Shalit, an IDF soldier held captive by Hamas for more than five years.

The former prime minister said he objected to the prisoner swap deal during his term at prime minister, which was later finalized under Netanyahu and led to Shalit’s release. “It’s hard to speak of the price we paid. The price I turned down was much lower both in terms of the number of prisoners released and their characteristics.”

On the deal to return the bodies of soldiers Eldad Regev and Ehud Goldwasser in return for freeing terrorist Samir Kuntar, Olmert said, “We did the best, most appropriate deal ever made in the context of prisoner swaps—we released a single heinous murderer serving a 30-year jail term and another person who was a little batty and that we wanted to be rid of.”

Olmert, who was released from prison six months ago, said, “Our assumption was that Regev and Goldwasser were no longer alive, and what pushed the deal to be completed was a message we conveyed to Hezbollah through an intermediary that said that if they didn’t agree, we’d declare them as KIA and break negotiations.”

“That gives an indication as to what should be done regarding people who are no longer alive,” Olmert added, possibly hinting at the bodies of soldiers Oron Shaul and Hadar Goldin, still held by Hamas in Gaza. “In Shalit’s case,” Olmert continued, “I had talks with the family. I always told them they could even ask for ten thousand (prisoners) to be released. It’s completely understandable for a young soldier’s parents to ask for that, but I—as prime minister—cannot acquiesce.”

“From my position as prime minister you have to see things differently. A country cannot go to war and put its army and soldiers at risk, painful as it is to say, to release one man,” he stated.

According to Olmert, who received a round of applause for his previous statement, “It needs to be said and not covered up with platitudes about the compassion of the Jewish heart. It’s the leadership’s role.”

Speaking plainly on the matter of returning Shaul and Goldin’s bodies, Olmert merely said they were “two dead soldiers.”

Asked about exerting pressure on Hamas by a third party, and hinting at the deterioration of relations with Recep Tayyip Erdoğan during Netanyahu’s term, Olmert said, “Turkish pressures? Maybe we could when we knew how to talk to them. We once did, but not really anymore.”

Lebanese lira drops to record low of LL10,000 to the dollar as political stalemate persists