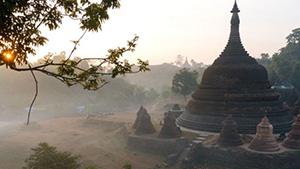 Climbing a small, scrubby hill behind the little riverside town of Mrauk U, a dreamy landscape reveals itself, of centuries-old stupas wreathed in mist, dotted with farming communities.

Anywhere else this spectacular monument would surely be overrun by tourists. But in Mrauk U just a handful of foreigners have dozens of Buddhist temples to themselves.

The site lies in Rakhine state, an isolated region at the western corner of Myanmar, with poor infrastructure and, in recent years, terrible headlines.

Mrauk U’s history helps explain why Rakhine state has experienced such serious sectarian violence, culminating in the expulsion of much of the Rohingya population, and the destruction of hundreds of their villages.

Tun Ne Win is a bright and energetic young man who works as a tour guide at the temples.

He is also the secretary-general of the local branch of the Arakan National Party (ANP).

The ANP has ridden, and at times inflamed, the fierce resentment and ethnic pride felt by Rakhine Buddhists, who consider themselves the state’s indigenous people, to become the strongest political organisation there.

“It feels like we are still living under colonial rule”, he told me.

“Because we don’t have any power or self-determination. We don’t feel we have freedom. Because everything is centralised by the government.”

Tun Ne Win eagerly took me around the extraordinary stone cloisters of Shite-thaung temple, lined with thousands of relief carvings.

A sketch of Mrauk U by a 17th century Dutch artist depicts what was then one of Asia’s most important trading centres. After that, say the Rakhine, it was all downhill.

In 1784 Arakan, as it was then known, was brutally conquered by the forces of Burmese King Bodawpaya.

Tens of thousands of Rakhine were taken as slaves, or fled over the border to what was then British-ruled Bengal.

Forty-two years later it was the British who occupied Arakan, in the first of three stages of colonising all of Burma.

Under British rule, large numbers of migrants from Bengal came to Arakan to work, augmenting the existing Muslim population, and igniting a primal fear among the Rakhine, which propels today’s ethnic conflict.

“We have no power. We are poor. We are just trying to develop our people, our state. It’s very hard for us to protect our identity. Maybe 50 or 100 years later, Rakhine, a nation in this country, will disappear.”

Mr Tun’s party, the ANP, has been accused by human rights groups of stirring up communal tension in 2012, when the first serious sectarian clashes broke out with Rohingya Muslims.

There was violence on both sides, but the Muslim population came off much worse, confined now by the security forces to their villages, or to cramped and squalid camps.

Mrauk U saw some of the most serious clashes, including an attack on the village of Yan Thein in which, say human rights researchers, 70 Rohingyas, some of them children, were killed.

For tourists visiting Mrauk U the Muslim population is invisible; a sign at Sittwe Airport warns foreigners that they cannot visit their communities without a permit.

We were able to drive through areas where Muslims could be seen from the road, but with two police special branch officers constantly following us, we could not risk stopping to talk to them.

The government justifies this segregation of the two communities by citing the hostility the Rakhine feel towards their Muslim neighbours. But that segregation is one-sided, imposed, along with other restrictions, only on the Rohingyas, and other Muslims caught up in the violence.

The Rakhine, however, do not feel that the government is on their side at all.

In a discussion with a group of villagers a few kilometres outside Mrauk U, we heard heated criticism of the government, for leaving Rakhine so poor, for exploiting the state’s resources, and most recently, for the deaths of seven men, shot by the police, as they protested against a ban on a ceremony to mark the conquest of 1784.

“We hate the police even more than the Bengalis”, said one woman, using the term they prefer for Rohingya Muslims.

Poverty is driving huge numbers of young Rakhine people elsewhere in search of work, only reinforcing the fear that they will be demographically swamped by Muslims.

We used to live together like brothers, said one woman, until 2012. So what changed? No-one seemed sure, but they were convinced the central government had a hand in the breakdown, although they all had long lists of alleged Muslim atrocities to recount, some of which were probably genuine, but some, they admitted, just hearsay.

Rampant drug and alcohol abuse is also taking its toll; Rakhine has become an important smuggling route for methamphetamines made in north-eastern Myanmar, en route to India and the Middle East, via Bangladesh.

The historic resentment the Rakhine feel towards the Burmese state makes the conflict in their state a complex, three-way battle.

Although the rise of the Arakan Rohingya Salvation Army (ARSA), a Rohingya militant group whose attacks triggered the military operation which drove out the refugees, has attracted plenty of international interest, there is another armed group, the Arakan Army (AA), claiming to fight for Rakhine rights.

Over the past two years the AA has killed far more Burmese soldiers than ARSA. People in Mrauk U did not hide their sympathy for the insurgents, and I was told a number of young men had recently joined them.

A question of identity

The government has now promised to follow the recommendations made last year by a commission, headed by the former UN Secretary-General Kofi Annan, in addressing the problems in Rakhine State.

The commission argued that economic development was the key to easing communal friction, but stressed the requirement to persuade both Muslim and Rakhine communities that they will benefit from it.

It also argued that discrimination against Muslims must end, and that they should get citizenship. The refugees in Bangladesh have made this a condition for coming back.

I did not meet a single Rakhine in Mrauk U who accepted this.

They are convinced that the Muslim population has been swollen by illegal immigration from Bangladesh, and by Muslims deliberately having large families. Nothing could shake that conviction.

This is the reason they object to the term Rohingya. They believe using it is a strategy by the Muslim population of Rakhine to win official recognition as an ethnic group, allowing them to demand a separate Rohingya state along the Bangladesh border, and advancing what the Rakhine Buddhists believe is the eventual extinction of their identity.

The government has done little to challenge this view, now widely shared in the rest of the country.

There is also real fear among the Rakhine that the Rohingyas, after their brutal expulsion, will be more militant, bent on vengeance.

For now repatriation of the refugees seems impossible. If and when it does happen, it will be very difficult to persuade the Rakhine that this is not yet another central government plot against them.

We did eventually manage to meet some Rohingya, by chance, as they gathered their harvest close to the main road.

By then we had shaken off our police escort. They were a relatively prosperous family, owning a few fields and some cattle. But they were constantly frightened, they said, of the security forces and their Buddhist neighbours.

They had not joined the exodus to Bangladesh, in part because they were so far from the border and feared what might happen to them on the long journey.

But they believed they might yet have to abandon their homes, and go.