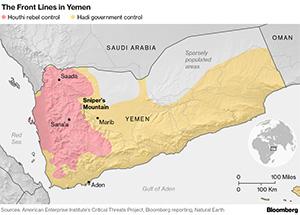 Somewhere on the other side of a desert valley, General Nasser Al-Thebyani’s enemies are dug into trenches. On handheld radios, his men pick up taunts and insults from the rebels.

This is the front line of the war in Yemen — and, some say, of Saudi Arabia’s wider struggle with Iran. The fighting is tough. After capturing one strategic hilltop under heavy fire, Al-Thebyani’s men dubbed it “Sniper’s Mountain.’’ In a more recent battle, the general says he lost 300 soldiers.

Still, his Saudi-backed force is inching forward. It’s now within about 30 miles (48 kilometers) of the country’s rebel-held capital — close enough that he’s starting to think about what comes next.

“Our plan is to surround Sana’a,” said Al-Thebyani, looking across a barren rockscape toward the rebel positions. “We don’t want to destroy the historical capital. We want to save civilians and protect government buildings.”

That will be a challenge, but maybe not be the biggest one facing the Saudi-led coalition right now. As it fights to push the Houthi fighters out of northern Yemen, trouble is brewing behind the lines in the south. That’s where Saudi allies have their power base – and now they’re turning on each other.

Dozens of people have been killed in clashes this month in Aden, the current seat of Yemen’s internationally recognized government. The Saudis hope those headquarters are temporary: the goal is to reinstate the administration in Sana’a, the capital, and restore its authority over the whole country. Instead, the Saudi-backed premier found himself holed up in his palace at one point, besieged by his own allies. Some of those groups are calling for a breakup of the country and a separate state in the south.

The three-year war in Yemen has added to strains on Saudi finances and is starting to cause ructions with the kingdom’s most important ally, the U.S. Increasing civilian casualties have drawn international condemnation. For all the hard-won gains of Al-Thebyani’s men, outright military victory still looks far off –- and so does a political settlement.

In terms of keeping the Saudi coalition together, “the damage has already been done,’’ said April Longley Alley, an analyst at the International Crisis Group.

“It will be difficult to maintain the facade of cooperation,’’ she said. Saudi allies are “united in opposition to the Houthis, but little else.’’ And the Saudi intervention has been over-reliant on “a punishing air campaign and partial blockade that has done little to dampen the military strength of Houthi irregular forces, but has stoked popular resentment.’’

The oil-rich central province of Marib is now largely under the control of the Saudi alliance. In the city of the same name, away from the frontline, there’s a semblance of normality. Restaurants are open, roads are being built and Yemenis are fleeing there from other parts of the country.

Humanitarian groups have condemned Saudi restrictions on aid flights into Yemen. On the day international reporters visited the area on a Saudi-organized trip, aid was arriving via a base about an hour outside the city. Soldiers stood guard at the perimeter of the sand airstrip, as packages of wheat, flour and medical supplies were unloaded from C-130 planes.

In Marib General Hospital, 12-year-old Abdulwahed Ahmed sat in a wheelchair, his prosthetic leg resting on the floor. Two-and-a-half years ago he was working in Houthi territory when he stepped on a land mine, and its blast flung him onto another one. He lost his right leg and both his forearms. Dozens of men in wheelchairs are waiting outside the hospital, also missing limbs.

“It’s so difficult for them,” said Mohammed Abdo al-Qubati, head of the hospital. “They went to fight to make the situation better in their country. Now, their lives are terrible.”

The conflict has killed more than 10,000 people and displaced 2 million. It’s often seen as part of a broader regional contest between Sunni-ruled Saudi Arabia and Shiite Iran, though Yemen’s civil war pre-dates the Saudi intervention, and the extent of Iranian backing for the rebels is unclear.

The sectarian divide plays out on the handheld radios used by Al-Thebyani’s troops. The Houthis call them “ISIS dogs,’’ and they retaliate by accusing their foes of being traitors and Iranian agents.

The men look tired and dusty. They live in tents and stone bunkers; uniforms were hanging on lines to dry on a clear winter day. During the battle for Sniper’s Mountain, the unit used donkeys to carry weapons to the front, and bring back the dead and wounded.

The soldiers said that fighting usually eases off in the middle of the day. That’s the time for chewing qat, a narcotic leaf popular throughout the country. During a recent battle, a truck delivered supplies to one set of fighters, then passed across no-man’s-land to do the same for their enemies. No one shot at it.

— With assistance by Zainab Fattah, and Dave Merrill