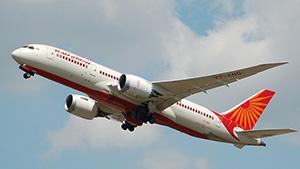 Responding to request submitted by Air India to operate flights on Tel Aviv-New Delhi line over Saudi airspace, Saudi official says no such authorization given, despite Israeli officials’ claims to the contrary; if authorized, flight durations will decrease by 2 hours, ticket prices will drop.

Mere hours after Israeli officials claimed that Air India received authorization to fly over Saudi airspace in its New Delhi-Tel Aviv line, a spokesman for Saudi Arabia’s General Authority of Civil Aviation said Wednesday they provided no such permission.

Previously, an Air India spokesman officially announced the airliner was awaiting authorization from Indian authorities to fly over Saudi Arabia. No incoming or outgoing flights have yet to pass through the skies of the Arab kingdom, with which Israel has no diplomatic ties.

If approved, the move will shorten flight time to India to only five hours, instead of seven, also causing ticket prices to dip.

In addition to the economic agreements signed by the two colleagues, the pair also signed an aviation agreement determining changes will be made possible to flight pricelists and security arrangements, and that coordination on the matter between the parties will be strengthened.

The national Indian air carrier received a 750,000 euro (NIS 3.2 million) grant from the Tourism Ministry to operate the line, which is expected to provide an additional boost to improving relations between the countries.

The grant effectively signifies 250,000 euro for each weekly flight, and is awarded to every airline that opens a line to a new destination.

The Indian company is expected to commence flights this coming Passover, according to plans, using Boeing 787 Dreamliners. Flights will operate three days a week—on Sundays, Tuesdays and Thursdays.

Israeli officials have yet to sign off on any Saudi authorization, even if one was given, but a senior Israeli official noted the Indian airline stated the flight’s path will take it over Saudi Arabia.

El Al Vice President of Incoming Commerce Michael Strassburger said that should such an authorization be provided, it will also change flights operated by his own company on the line to Mumbai.

“This will significantly shorten flight times, leading to lower operating costs and ticket prices for passengers. We hope and believe that this agreement will also be valid for all Israeli airlines, because there’s no difference between passengers flying Israeli airlines and those flying foreign ones.

“It is also congruent with an agreement Israel signed with India regarding air carriers,” he concluded.