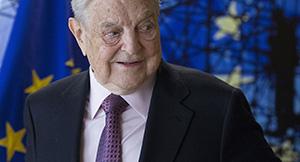 Speaking at the 2018 Davos World Economic Forum last month, US billionaire George Soros made it plain that he is ready to support the Best for Britain campaign, which calls for scrapping the Brexit referendum results.

Since June 2017, US billionaire and founder of the Open Society Foundation (OSF), George Soros has provided 400,000 pounds (more than 500,000 dollars) to a campaign urging the UK to stay in the EU, according to The Guardian.

The newspaper quoted Lord Malloch-Brown, chairman of the Best for Britain campaign, as saying that they cooperate with “campaigners, businesses, unions, politicians and community groups to make sure everyone has a strong campaigning voice.”

“George Soros’s foundations have, along with a number of other major donors, also made significant contributions to our work. Indeed, through his foundations, he has contributed £400,000,” Malloch-Brown said.

At the same time, he mentioned “small donors” who he said “have collectively contributed more” to the Best for Britain campaign.

“So he is an important and valued donor but his funding is one among many sources,” Malloch-Brown noted, referring to Soros.

In a speech at the 2018 World Economic Forum in Davos, Soros said, in particular, that he “would like to see Britain remain a member of the EU or eventually rejoin it.”

The United Kingdom held the Brexit referendum on June 23, 2016, when almost 52 percent of Britons backed the decision to withdraw from the 28-nation bloc.

The Brexit negotiations were launched in June 2017 and are due to be completed by the end of March 2019.

However, the opponents of Brexit, including Labor Deputy Leader Tom Watson, have repeatedly called for the cancellation of the Brexit vote results and the holding of a second referendum on the issue.