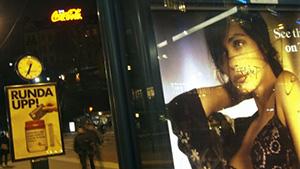 Sweden’s capital is poised to ban sexist and racist outdoor advertising. But should it be up to politicians to decide which billboards go too far?

For Daniel Hellden, one of Stockholm’s deputy mayors and a long-serving Green Party activist, making sure women aren’t made to feel uncomfortable by explicit or gender stereotyped advertising in public spaces is both a political and a personal mission.

“I know my daughters, they don’t like it. They feel bad,” he says, tucking a loose strand of hair back into his ponytail.

“We should not as a city be part of this sort of advertising. I have a responsibility to the citizens of Stockholm to ban this.”

It’s a mantra his party and its senior coalition partner, the centre-left Social Democrats, have been pushing for three years, long before the global #MeToo campaign took hold.

Meanwhile, record immigration to the Swedish capital during the same period (fuelled by the refugee crisis and a thriving global tech scene) has, Mr Hellden accepts, fuelled a wider awareness of stereotyping and a need to avoid “racist undertones” in public spaces.

His efforts to stamp out discriminatory billboards, digital displays or information boards will come to a head later this month, when the City Council is expected to approve a ban on racist and sexist advertisements already agreed in December by the council’s cross-party traffic division, of which Mr Hellden is at the helm.

The division will follow the same guidelines about what constitutes a sexist or racist advertisements as those set out by the country’s nationwide advertising watchdog, Reklamombudsmannen (RO).

But whereas RO cannot issue sanctions to companies in breach of the guidelines, the traffic division will be able to order them to take down offensive billboards within 24 hours.

The move in Stockholm follows a similar initiative in Paris a year ago, when the city council voted to bid au revoir to sexist or otherwise degrading adverts public billboards, following a controversial “porn-chic” campaign by YSL.

Meanwhile adverts promoting negative body images were banned across the Transport for London (TfL) network in 2016 when the British capital’s mayor Sadiq Khan called on TfL to set up its own steering group, to ensure adverts adhere to national regulations set out by the UK’s advertising watchdog, the ASA.

To global observers, it might come as a surprise that Sweden, a country that has long harboured a reputation as best-in-class when it comes feminism and diversity is grappling with similar problems.

One take on the issue is that sexism and racism are high on the agenda, and that neither Swedish politicians nor consumers are afraid of being vocal about these issues. But the move in Stockholm follows a decade of debates that have so far failed to stamp out discrimination in the advertising industry.

Barely a week into 2018, H&M apologised after a social media storm following an advert of a black child modelling a hoodie alongside the message the “coolest monkey in the jungle”.

Since Reklamombudsmannen, the advertising watchdog for Sweden’s 10 million strong population was set up in 2009, it has made more than a thousand assessments linked to gender and other forms of discrimination (including racism), with around a third of complaints upheld.

The non-partisan Swedish Women’s Lobby recently labelled Sweden the worst in the Nordics when it comes to gender images, due to being the only country in the region lacking legislation against sexism and stereotyping in advertising.

But Stockholm’s plans to try and step up efforts against discrimination have already come under fire from The Association of Swedish Advertisers (Sveriges Annonsörer), which represents agencies and marketing professionals.

Its chief executive, Anders Ericson, argues that despite complaints from what he describes as “a really strong group of feminists”, Sweden is already doing “a really terrific job” in self-regulation. He fears a ban will increase red tape and curb freedom of expression.

“I think it’s wrong. Because if the advertising ombudsman comes to one conclusion and Stockholm city council comes to another conclusion, exactly on the same advertisement, who will we listen to?”

He says he also fears it will be “quite costly” for advertisers asked to take down up to 200 billboards spread across Stockholm at short-notice and questions the impact of localized measures in a relatively small capital, where many commuters live outside the city’s boundaries and might still come across banned adverts elsewhere.

In Stockholm’s main shopping district, clustered around the black and white triangular-tiles of its largest square, Sergels Torg, there are no suspect billboards currently on display. But the appetite for the city council’s plans appears mixed.

“Certainly it will make people think about more what kind of content they put in their ads I think. They have to regulate it because that’s the only way we can get rid of norms – cos it’s just been going on for decades,” says Tuva Ekelund, a Stockholm-based DJ originally from Norway.

However a Swedish medical technology worker called Anton says he thinks “the ban doesn’t really serve a purpose because the market will react to this itself.”

“I am a bit worried that it’s up to the politicians to decide those types of things,” he adds. “To be politically correct is more interesting than the actual matter, sometimes,” he argues.

Back at Stockholm City Hall, Deputy Mayor Daniel Hellden insists his team will maintain a close dialogue with the advertising industry once the ban comes in, and complete a full review of how things are going after the first year of the new guidelines.

“We won’t just be banning ads without any discussion with the rest of the community,” he argues.

Meanwhile he hopes that other Swedish cities and municipalities will follow Stockholm’s lead.

“They know what we are doing, and they are looking at what the effects will be.”