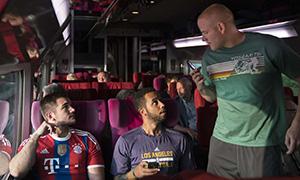 Bad at acting but not as bad as all that … from left, Spencer Stone, Anthony Sadler and Alex Skarlatos in The 15:17 to Paris. Photograph: Keith Bernstein/AP

The authentic courage of three American heroes who foiled a terrorist attack has been anti-alchemised by Clint Eastwood into a strangely boring, dramatically inert film in which the main characters remain as opaque and unreadable as sphinxes to the very last.

But there is some interest in this film nonetheless because of the experimental chutzpah Eastwood has showed in using – not Chris Hemsworth, not Bradley Cooper, not Trevante Rhodes – but the three actual guys stolidly playing themselves. (The attacker, one Ayoub El-Khazzani, being now incarcerated, was not available for filming.) The resulting film looks bizarrely like an essay in take-it-or-leave-it social realist grit or radical, non-professional clunkiness, as if before filming Clint watched Ken Loach’s I, Daniel Blake and Tommy Wiseau’s The Room and couldn’t decide which one he liked more.

The men themselves were Spencer Stone, Alek Skarlatos and Anthony Sadler; two were from the US military, trained in combat and first aid, and at least one had a strong Christian faith. While backpacking in 2015 the three tackled a heavily armed jihadi terrorist on a train from Amsterdam to Paris – saving dozens of lives. There also happened to be a British guy there whose contribution, following the tradition of Hollywood war movies, has been pretty much cheerfully ignored.

The effect of realness in this film is a strange one. The three are bad at acting, of course, but not as bad as all that, and a basic level of woodenness is important for underscoring the film’s genuine quality, because how disconcerting would it be if they all turned out to be talented thespians, a trio of Benedict Cumberbatches? The movie starts with the tense initial situation aboard the train and then – exasperatingly – keeps cutting back to the three men’s dull and diffidently directed backstories, their unhappy and unsatisfactory childhoods, their early lives in the forces, and then their quite excruciatingly boring backpacking holiday, which we all have to live through in real time before they climb aboard the 15:17 to Paris and we reach the main event.

Except that, weirdly, the attack is not the main event. That comes one step later when Eastwood, with almost avant garde cheek, uses actual footage of French President François Hollande presenting the three men with the Légion d’honneur and we seamlessly cut away to the actors playing their adoring mothers and relatives. Even here, though, he can’t resist slathering syrupy music on the soundtrack to make sure we realise that it’s an emotional moment.

The attack itself is robustly and forthrightly shot, without the nerve-twisting horror of Paul Greengrass’s 9/11 movie United 93, it is true, but that was a different situation. It is all over pretty quickly. It seems almost anticlimactic and detached. Perhaps that is faithful to the experience itself.

But, intentionally or not, the real meat of the film is that mind-bendingly boring holiday: endless beers, endless coffees, endless selfies. No tension between the guys. No real connection either. They look as if they don’t know each other all that well. But then again, that is probably what real friends actually look like, without artificially scripted filmic moments to denote friendship. Eastwood and his screenwriter Dorothy Blyskal, who has adapted the three men’s book about the event, have rigorously avoided any premonitions or creepy omens, although Spencer talks about God having a purpose to his life. No, we just trudge through the vacation, like being forced to look at someone else’s photos.

It is dull. But perhaps that’s what life is – dull. Especially compared to a sudden burst of frenetic, heroic activity on a train when you’re faced with a theocratic murderer and your training kicks in.

As for Stone, Skarlatos and Sadler, my admiration for them knows no bounds. But their real presence in the film? It reminded of the Player in Tom Stoppard’s Rosencrantz and Guildenstern Are Dead who said he once hanged someone for real on stage and a baffled audience just took it for bad acting. A documentary by Eastwood might have served everyone better. But François Hollande might be in line for a special reality Oscar for that climactic movie speech he didn’t realise he was giving.