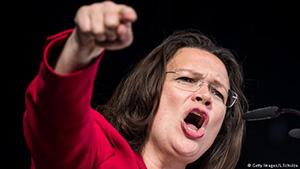 Former Labor Minister Andrea Nahles is set to be the first woman to head Germany’s Social Democrats. The party is hoping she can help it to reinvent itself in a new grand coalition government.

Nahles emerged as a winner in the reshuffle at the top of German politics that unfolded on Wednesday in the aftermath of the new coalition contract agreed between the Social Democrats, Angela Merkel’s conservative Christian Democrats (CDU) and their Bavarian sister part the Christian Social Union (CSU).

The Süddeutsche Zeitung newspaper reported that party leader Martin Schulz had made a deal with Nahles that would see him make way for her as he took up a new role as Germany’s foreign minister. Both Nahles’ promotion and Schulz’s new job are yet to be confirmed. There were other reports on Wednesday that Schulz was planning to resign from his role as SPD head and that he tapped Nahles as his replacement.

Nahles was the German labor minister until 2017.

Nahles is known for her blunt and passionate manner, and in January she was instrumental in bringing a divided party round to accepting the new round of coalition talks with a fiery speech at a special party conference.

It was not her first eye-catching performance. Back in 2013, she attacked Merkel with a rendition in the Bundestag of a popular line from the Pippi Longstocking theme song, “I’m making the world widdle widdle wid how I like it.”

SPD insiders are now hoping that she has the assertiveness the party needs in its quest to modernize and include more women in key positions.

Despite the new deal, the SPD — still ailing in opinion polls — is determined to sharpen its profile to set it apart from the CDU. In last September’s election, the SPD garnered just 20.5 percent of the vote — its worst-ever result, which pundits put down to a lack of new ideas after four years of centrism in an alliance with Merkel.

What is her own political profile?

The 47-year-old Nahles hails from the left-leaning wing of the party, and has always been keen to boost workers’ rights without alienating business leaders. Last year she told steelworkers at ThyssenKrupp that “we came here to fight” and that “I’ll be there for you.” The company is set to merge with India’s Tata, which could lead to job losses.

As Labor Minister, she introduced Germany’s first nationwide minimum wage in 2015 against fierce resistance in a country that has always favored collective bargaining agreements for individual sectors.

What was her path to politics?

She joined the Social Democrats at age 18 and later founded one of the party’s local associations in a village near her hometown of Mendig. At university in Bonn, she studied German literature, philosophy and political science.

In 1995, she became leader of the party’s youth wing, the Jusos, and was named general secretary of the SPD in 2009 before concentrating on her post as labor minister.

In her high school leavers magazine, she famously said of her career plans that she either wanted to be a “housewife or chancellor.”