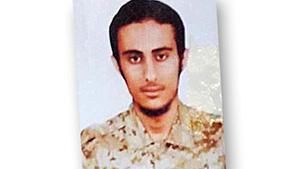 In a city that has grown painfully accustomed to loss, Umm Riyadh’s personal death toll has shocked residents of Taiz in south-western Yemen.

Shortly after the launch of an operation by pro-government forces to break the Houthi rebel siege on the city last month, Umm Riyadh received the news that her son, Moussa, had been killed on the frontline.

He was the fourth son she had lost in the conflict in the space of three years.

Fridays – the first day of the weekend – used to mean a full, bustling house for Umm Riyadh. She would sit down to lunch with her husband, her 10 sons, her daughter-in-law and four grandchildren.

But she began to lose the life she had known in mid-2015, after the conflict escalated with the beginning of a Saudi-led military campaign in support of President Abdrabbuh Mansour Hadi, who had gone into exile.

Umm Riyadh says that she and her family were forced to leave their home in the Al-Jahmaliyya neighbourhood by rebel fighters, who then blew it up.

Later that year, her son Taha was killed fighting with the pro-government forces, followed by her eldest son Riyadh. Kamal was killed in late 2016, and Moussa in late January.

For many in Taiz, Umm Riyadh has become a symbol of the suffering that has touched many families due to the crippling siege and ongoing violence.

Officials and activists visited Umm Riyadh recently with words of support and gifts to honour her for the sacrifices she has made for the city.

Speaking on the phone from her temporary home, she struggles to open up about how she feels about being recognised in this way. She simply repeats “Praise God, it was destiny…”, as if trying to ward off the full impact of her grief.

The Houthis and their former allies loyal to late leader Ali Abdullah Saleh laid siege to Taiz shortly after the start of the Saudi-led campaign.

After being driven from the city, the rebels seized control of its entrances, preventing the delivery of food and medical supplies.

Almost three years of relentless fighting has taken a devastating toll on the city – two thirds of its pre-war population of around 600,000 have fled, according to the United Nations. The situation has also drawn many of the city’s most capable men to the frontlines.

In the wake of the killing of former President Saleh by the Houthis late last year, pro-government forces have made a push to drive the rebels from a number of previously deadlocked fronts across the country.

Umm Khattab is the widow of Riyadh, the oldest of the 10 brothers. She praises her mother-in-law’s strength in the face of all her loss.

“She’s patient, she prays, she fasts. If it was any other mother, she would have fallen apart.”

The conflict has inflicted a particular kind of suffering on mothers, she says. “For a mother, when her son is in the street, [fighting] in the war, the whole time in her heart she’s thinking about her son, worrying if he’s alive or dead.”

Taha, the youngest of Umm Khattab’s four children, was just a few months old in 2015 when his father was killed. As he grew older, he became attached to his Uncle Kamal, who was later killed in the fighting.

“He used to call him baba [daddy]”, Umm Khattab says.

The death of Moussa, to whom Taha had also grown close, felt like the death of yet another father for the little boy, says his mother.

“He used to follow him around… he loved him. Now his uncle is martyred and we say to him, ‘where is your Uncle Moussa?’ And he says, ‘My Uncle Moussa died, the Houthis killed him.'”

The military operation continues, with the city witnessing some of its fiercest fighting since the violence first broke out. Two of the remaining brothers are still on the frontlines.

I ask Umm Khattab how she will feel the day the siege is lifted.

“It will be the biggest happiness for me and at the same time, the biggest sadness,” she says.

For each of the city’s four fronts, she explains, the family has lost one son.