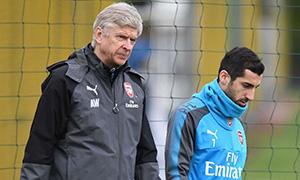 Despite the latest inevitable Wengerian response, there is also a recklessness in his dotage, as though the slide from the top four has liberated him

There comes perhaps a point in the lives of men at which the usual considerations no longer seem to apply. Hang around long enough and you’re allowed a certain licence. The foul-smelling tobacco becomes an amusing quirk, the brash waistcoat evidence of individuality, the brusque repartee a life-affirming sign of energy. He’s packing the team with inconsistent creators and failing to address the concerns at the back of midfield? That’s just Arsène Wenger, dear: you won’t change him now.

A rare mood of optimism seems to have settled over the Emirates Stadium, although there have been plenty of those that have gone nowhere over the past decade. It’s likely anyway to be challenged at Wembley on Saturday by a Tottenham side who lie four points above them in the Premier League table and who offer a reminder of their younger selves.

Spurs are youthful and thrusting, blessed with an innovative and likable manager who likes to develop his own talent, and excited by the prospect of a move to a new stadium – just as Arsenal were a decade ago. That should both concern Spurs, for whom their neighbours serve as a warning of the consequences of endlessly deferred fulfilment, and terrify Arsenal, who risk seeing their rivals achieve success with their blueprint.

That’s not to say Arsenal’s current positivity is entirely without justification, given that it looked at the start of the transfer window as though it might be an awful lot worse. Alexandre Lacazette may be wondering what on earth is going on but the arrivals of Pierre‑Emerick Aubameyang and Henrikh Mkhitaryan have at least kindled some hope. They may be misfits who were only available because their previous clubs lost patience with their lack of discipline and inability to impose themselves respectively, but both are fine players who have worked well together in the past.

Whether they are what Arsenal needed is a very different issue. Equally, while the retention of Mesut Özil has been presented as a coup, it may just as well be asked why no other club was prepared to meet the wage demands of a player who would have been available on a free transfer in the summer.

Sign up to our weekly email, The Recap, featuring the best of our coverage and delivered every Friday at 12pm GMT.

But at least there is the nucleus of a squad once again and perhaps, for those minded to peer beneath the surface, evidence of the guiding hand of Sven Mislintat and a modified approach to recruitment that could be the first evidence of a post-Wenger future.

Fundamentally, though, Arsenal are left as what they were – no more reliable, no more robust and no more likely to mount a serious title challenge than they have been for years. They will still produce the occasional dazzling performance, still be capable of swatting aside lesser sides at home and still falter when put under pressure away from home.

Wenger is a very different personality to Brian Clough and yet it increasingly seems as though their careers are following similar trajectories. Just as Clough, after astonishing early success, ended up taking Nottingham Forest back to the second flight where he found them, so Wenger has returned Arsenal to fifth in the table (Wenger and Clough only missed each other by three years but the worlds they inhabit are very different, at least in terms of financial stratification and the capacity of clubs to move up and down, less hindered by lowly status, less insulated by wealth).

Just as Clough slowly cast off the bruisers and difficult personalities – Larry Lloyd, Kenny Burns and Archie Gemmill – who had underpinned his great sides for pleasant young men who played football as neat as their haircuts, so Wenger, whose early sides were notorious for the number of red cards they collected, has rejected physicality and pragmatism for a suffocating niceness. Style, doing things the right way, or at least the characteristic way, has become a surrogate for trophies.

Yet there is also a recklessness to Wenger in his dotage, as though the slide from the top four has liberated him. There was the dalliance with the back three, 20 years after he had dismissed the formation as archaic. And now there is this, the accumulation of four attacking players for a collective cost of £150m and an Alexis Sánchez who almost certainly cannot play together. It feels an act of extravagance, a final splurge of an ageing master, gilding the gateposts when there is a hole in the roof.

On a sunny day it may even bring some joy, a reminder of the gleam that once accompanied everything Wenger did at Arsenal. When the rain comes, though, there will be sighs, sad smiles and familiar questions about priorities. But what do you expect? That’s just Arsène, dear.