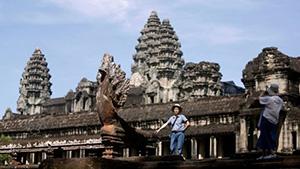 A court in Cambodia has granted bail to seven of the 10 foreign tourists who were charged last month with producing pornographic images.

The group were arrested in January after photographs emerged of people imitating sex acts at a party in a villa in north-west Siem Reap province.

If convicted, they could face up to a year in a Cambodian prison.

Three of the alleged party organisers – from Britain, the Netherlands and Norway, remain in custody.

A total of 87 foreigners were arrested on Jan 25 in a raid on a “Let’s get wet” pub crawl event, after being accused by police of “singing and dancing pornographically”.

Police say most were released after being “educated” over their unacceptable behaviour.

But ten members – five Britons, two Canadians, a Norwegian, a New Zealander and a Dutch national, were charged and detained in custody.

The British Foreign Office confirmed on Thursday that four British nationals were among those released on bail. They said staff continued to assist the nationals and remain in contact with the Cambodian authorities.

A spokesman for the Siem Reap provincial court said those released on bail could not leave the country as they their passports had been confiscated.

Siem Reap is popular with tourists because it is close to the famous ancient ruins of Angkor Wat, Cambodia’s biggest tourist site.

The country’s nightlife scene has rapidly grown over the past few years as it has become more popular among backpackers and budget travellers.

This has sometimes placed tourists at odds with Cambodia’s socially conservative Buddhist culture.

In 2016 the country announced a ban on tourists wearing “revealing clothes” from visiting the ancient temple park, after a number of foreign tourists were arrested and deported for taking nude photographs at the site.