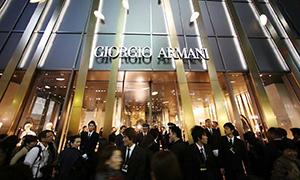 A public elementary school in Tokyo’s exclusive shopping district of Ginza has raised eyebrows with a plan to adopt uniforms designed by Italian fashion brand Giorgio Armani for its students.

Taimei elementary school is introducing the uniforms for incoming pupils, each costing more than 80,000 yen ($729), including optional items, or more than three times as much as current ones, the Huffington Post said.

Armani’s Japan head office, located in Ginza, is just 200 metres (219 yards) away from the grade school.

“I was surprised, and wondered why such luxury brand-designed uniforms have been picked for a public elementary school,” an unnamed mother was quoted as saying.

“I’m worried that a wrong notion that something expensive is good and something cheap is bad could be imprinted on children,” said the woman, whose child is set to start at the school in April, when a new school year begins.

In a letter to parents last November, headmaster Toshitsugu Wada said Taimei was a landmark in Ginza, and the decision to adopt the Armani-designed uniforms aimed at creating an atmosphere suitable for such a school.

Taimei officials were not immediately available for comment, but Wada posted a statement on the school’s home page, promising to provide sufficient explanation on the plan for new uniforms.

“With humility, I take the criticism that explanation has been insufficient and not well-timed. I will go on explaining carefully to those concerned.”