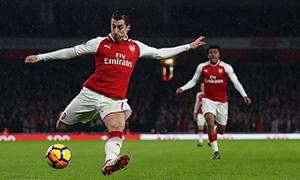 In his first Arsenal home game, the new signing’s partnership with Mesut Özil created a feelgood factor that lifted the team

Amy Lawrence at the Emirates Stadium

When Mino Raiola mischievously suggested “Sánchez is part of the Mikhi deal, not the other way round”, the general consensus was to raise eyebrows at the brash machinations of the agents’ world. It is fair to say most people felt the Alexis Sánchez-Henrikh Mkhitaryan swap was weighted more favourably for Manchester United.

The way Mkhitaryan introduced himself to thousands of new admirers with eye-catching elan in the north London downpour did make you wonder, though. The equality of the swap suddenly felt like a much more interesting and nuanced question. Arsenal’s new No 7 added such value to the team, not only in the hat-trick of assists and generally impressive mixture of deft touches with determined attitude, but also in the way he opens up the path to play differently, based around a double creative pivot with Mesut Özil.

A blur of one-touch passing and free-form movement, with the front players switching positions fairly effortlessly, bludgeoned Everton’s gameplan. For all the excitement to see the record signing Pierre-Emerick Aubameyang show flashes of speed and dink a debut goal, Mkhitaryan left a deep impression on the game, which suggests Arsenal have recruited the Dortmund version, full of verve and instinct, rather than the Manchester United version, who by the end looked like a man in need of a pick-me-up.

What Arsène Wenger describes as the “positive swing” of a big transfer looks like it is working both ways. Arsenal responded to the feelgood factor of two exciting new faces. The winter signings look energised by their new challenge and environment. Aubameyang had only two 45-minute sessions, so will hope to become more dominant. Mkhitaryan clicked so readily into it he looks instantly like an important team component.

He had the freedom to pop up in all sorts of positions and there was something about his presence that reminded Wenger of the much-missed Santi Cazorla. “There are similarities there. I wish. Santi was an exceptional football player. But he for sure has the technical level to play in our team.”

If there was a lack of trust shown to him by José Mourinho, Wenger is only too delighted to give Mkhitaryan plenty of it: express yourself, enjoy yourself, be yourself, show how much you love football. By way of explanation, Wenger tried to put across the essence of Mkhitaryan’s footballing charisma: “I met Mkhitaryan before he came here because I liked always his game. He’s a player completely focused on football, dedicated totally to the game, and comes from a country, Armenia, where you need special character to become a great football player. That’s why he looks happy to play football because he just loves it.”

Wenger seemed a little rueful that he did not sign Mkhitaryan when they were close to a deal 18 months ago, to team up with the man he would replace at Arsenal. “We could have had both, maybe,” he said.

Arsenal’s new attacking foursome quickly turned into a five as Aaron Ramsey sprinted forward in search of goals – but it is a risky policy. Against more dangerous opponents than a vapid Everton team who were so easily bamboozled, spaces in midfield and defensive shakes are still there to be exposed. Everton were not really in a fit state to test Arsenal too much, although they did improve when the younger substitutes came on.

While the 5-1 win ensured it was a day for Arsenal to celebrate new signings, Everton were not able to emulate that positive swing at all. Sam Allardyce does not feel Cenk Tosun is ready to start difficult games and felt it best to put his arm around Theo Walcott. “I protected him in the end,” he said. “We weren’t going to come back and get a result and the last thing I want him to do is fatigue and pull a muscle. I put the younger lads on, who actually did better than the older lads. I thought Tom Davies and Dominic [Calvert-Lewin] did a lot better than the 11 lads who were on the pitch before them.”

A day to forget for Everton. The start of a new cycle for Arsenal? “Let’s not predict too far ahead,” Wenger said, mindful of the north London derby on Saturday. “Let’s see how we go into the next game. It’s a better test. If I tell you the same, I have a positive mood after the next game, we’ll say yes, and be positive until the end of the season.”