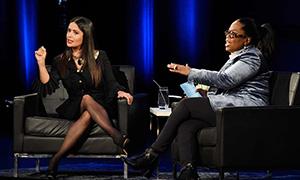 During a filmed conversation with Oprah Winfrey, the actor alleges Weinstein’s bullying during the making of her 2002 artist biopic Frida

Salma Hayek Pinault has claimed that Harvey Weinstein threatened to break her kneecaps, as part of his long-running tirade against her for refusing his advances.

Hayek Pinault was speaking to Oprah Winfrey at a recording of Oprah’s SuperSoul Conversations at the Apollo theater in New York on Wednesday, and outlined her run-ins with Weinstein and their aftermath. Hayek Pinault said that, during the making of her 2002 film Frida, about Mexican artist Frida Kahlo, Weinstein had told the film’s director, Julie Taymor: “I am going to break the kneecaps of that ‘C-word.’”

Hayek Pinault has already detailed the turmoil she experienced during the making of Frida, which she co-produced as well as starring in, in a 2017 article for the New York Times. She claimed that Weinstein had threatened to kill her, had demanded she perform a nude sex scene with a female co-star, and initially refused to release the film in cinemas, which she ascribed to her refusal to agree to any of his sexual propositions.

Weinstein denied the allegations at the time and in a statement said he “does not recall pressuring Salma to do a gratuitous sex scene with a female costar and he was not there for the filming”.

Hayek Pinault explained to Winfrey why she had not been part of the Times’ initial wave of allegations against Weinstein, and published her essay two months after the story first broke. “[The Times] contacted me to be a part of the first story and already by this contact, there was all this turmoil and I started crying when they asked and I ended up not doing it. And then I felt ashamed that I was a coward. I was supporting women for two decades, and then I was a coward.”

“When the information about Harvey came out, I was ashamed I didn’t say anything. But I felt like my pain was so small compared to all the other stories.”