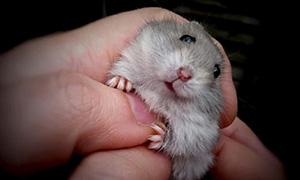 Florida college student says Spirit Airlines originally told her the pet was allowed, but denied it entry at the airport

Missing a flight can be quite a hassle for your average passenger, but for Pebbles – an emotional support dwarf hamster owned by Belen Aldecosea – it was downright deadly.

Aldecosea flushed Pebbles down an airport toilet after her pet was denied passage on a Spirit Airlines flight on 21 November and she could not figure out any other way to get home to south Florida. The 21-year-old college student said that she had been assured in advance that the hamster could travel with her and said that an airline employee advised her to either flush the animal or let it loose outside.

After hours of indecision – and unsuccessful attempts to rent a car – the hamster owner chose the former, she told the Miami Herald.

“She was scared. I was scared. It was horrifying trying to put her in the toilet,” Aldecosea said. “I sat there for a good 10 minutes crying in the stall.”

Derek Dombrowski, spokesman for Spirit Airlines, acknowledged that the company had mistakenly told Aldocosea that the hamster was permitted to fly, but denied that killing the animal was their idea.

“We can say confidently that at no point did any of our agents suggest this guest (or any other for that matter) should flush or otherwise injure an animal,” Dombrowski said by email. “It is incredibly disheartening to hear this guest reportedly decided to end her own pet’s life.”

Pebbles is just the latest emotional support animal to make headlines in the US. In January, an emotional support peacock named Dexter was barred from traveling on a United Airlines flight, despite having been bought its own ticket.

In recent weeks, both United Airlines and Delta have cracked down on the wide range of creatures claimed as therapy pets. Such moves have been supported by the union representing flight attendants, which said in a statement that the workers struggle to cope with issues like “biting, aggression, urination, defecation, allergic reactions, conflict and other disruptions”.

But Adam Goldman, a Miami attorney representing Aldecosea, pushed back on any comparison between Pebble and Dexter.

“This wasn’t a giant peacock that could pose a danger to other passengers,” he told the Herald. “This was a tiny cute harmless hamster that could fit in the palm of her hand.”