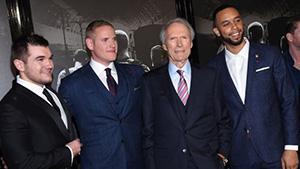 A lawyer representing a man accused of a foiled French terror attack has spoken out against a film by Clint Eastwood depicting the incident.

The film – The 15:17 to Paris – is based on events on board a Thalys express train when a gunman tried to attack passengers in August 2015.

The film, starring the men who stopped the attacker, opened on Wednesday.

A lawyer for suspect Ayoub El-Khazzani has asked for showings to be suspended while a judge reviews evidence.

Sarah Mauger-Poliak said the film was a violation of her client’s rights because it presents a “fictionalised” and “one-sided” view to the public as fact.

“I am aware that my client is not an angel but let justice do its work,” she said.

Mr Khazzani, from Morocco, was found with a range of weapons including a Kalashnikov assault rifle on board the Amsterdam-to-Paris train. He is alleged to have links to radical Islam.

He was eventually subdued by some of the passengers after opening fire, including three American friends who star as themselves in the Clint Eastwood-directed re-creation.

Off-duty military servicemen, Spencer Stone and Alek Skarlatos, and their friend Anthony Sadler, were backpacking through Europe on holiday at the time of the attack.

They were hailed as heroes after the foiled attack – they and three other passengers, including a British businessman, were awarded with France’s top honour.

Ms Mauger-Poliak said she had not ruled out taking legal action against Warner Brothers to get the film suspended during the judge’s instruction period – where he decides if there is enough evidence for the case to go to trial.

“That Hollywood has delivered its ‘truth’ before the judges is at the very least worrying,” Ms Mauger-Poliak told radio station France Inter.

Mr Eastwood’s film is the latest in a series of movies he has made about real-life people in extraordinary situations.

He has also directed films about pilot Chesley Sullenberger, who landed his damaged plane on the Hudson River, and about record-breaking US Navy Seal sniper Chris Kyle.

The 15:17 to Paris is released in the US and UK on Friday, but has been met with overall poor reviews in France at its opening.