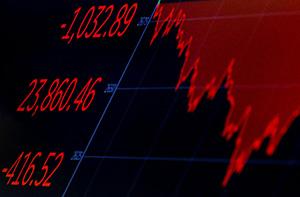 NEW YORK (Reuters) – Machine-guided, numbers-obsessed fund managers could cause U.S. stock prices to weaken further as they adjust to the return of wild gyrations in global markets.

Several years of generally low volatility, when shares have not experienced big day-to-day oscillations, in part due to money-printing and bond-buying policies pursued by the world’s major central banks, has led investors to shovel billions of dollars into some highly technical and risk-focused strategies.

“There will be for the rest of this week a systematic selling,” from funds that each chase such trends in the market, said Jerry Lucas, senior strategist at UBS AG (UBSG.S) Wealth Management’s Chief Investment Office.

These volatility-contingent strategies include volatility control funds, risk-parity funds, commodity trading advisers (CTAs) and trend followers, analysts said, although it was unclear what their impact was in Thursday’s stock market selloff.

With the recent return of stock market gyrations, such funds are expected over time to shed relatively riskier assets, such as equities, in some cases to achieve a constant level of volatility, those analysts said.

U.S. stocks have made wild swings this week amid an overall sharp decline. The S&P 500 index’s .SPX 3.75 percent fall on Thursday meant the index has technically entered a correction, defined as a 10 percent fall, since it reached a record high on January 26. [.N]

“When markets start to become volatile, they basically have to start selling equities,” Omprakash said.

However, Michael Mendelson, a risk-parity portfolio manager at AQR Capital Management LLC, said in a note that risk-parity strategies would not have caused the sell-off.

“The media and the analysts generally get the idea right, that risk-parity and trend-following strategies tend to sell when volatility rises. But when it rises quickly, they are really selling after that spike,” said Mendelson.

“It takes an awful lot to move big global stock markets and the sizes and trading speed of risk-parity and trend-following strategies just don’t get you there,” he said.

Ben Hunt, chief investment strategist at Salient, whose Salient Risk Parity Index is used as a market benchmark, said he believed selling pressure Thursday was coming from financial advisors selling options on their clients’ accounts, rather than strategies such as risk-parity.

“What gets painted as the bogeyman here is things like risk parity funds,” said Hunt. “Two things: these funds are barges, not speed boats, they change very slowly. A daily change in volatility is not a factor.”

Hunt said even a sustained shift higher in volatility of an asset class would only trigger a small fraction of change in a given day.

Trend-following hedge funds were stopped in their tracks by global market volatility this week, with some giving up all of their gains from a stellar start to the year.

Market participants peg the overall amount of money in volatility-contingent strategies at around $1.5 trillion and warn that a new era of heightened volatility could eventually lead to extended weakness in stocks and other riskier assets.

“Right now, the momentum is all to the downside,” said Bruce Bittles, chief investment strategist at Robert W. Baird & Co.

“Until that has broken, we’re still vulnerable.”