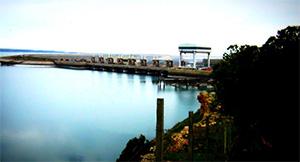 MOSCOW (Sputnik) – A sudden rise in the water level has destroyed a key bridge over the Euphrates River that separates government and US-backed militant forces in Syria’s east, suggesting this could be intentional, the Russian Defense Ministry said Friday.

The 210-meter (689ft) long bridge near the city of Deir Ez-Zor was built by the Russian military last September to move troops to the eastern bank controlled by rebel forces allied with the US-led coalition.

“As a result, the bridge was destroyed the next day,” the paper reported. “An investigation by Syrian experts found that the abrupt rise in water level was caused by the intentional opening of floodgates at the Tabqa Dam in the territory held by groups controlled by the US-led ‘international coalition’.”

Previous year, Kurdish Firat News Agency, quoted Kurdish-led Syrian Democratic Forces SDF commander Rojda Felat as saying that the Syrian city of Tabqa and the Tabqa Dam were liberated after more than a month of offensive in the region. The US-led coalition aviation and US special forces provided assistance for the Syrian rebels.

The Syrian Democratic Forces, predominately consist of Kurdish fighters, but also include members of the Syrian Arab Coalition. Earlier, Washington confirmed it has been arming the forces, noting that the weapons were provided for the offensive to liberate Raqqa from Daesh.