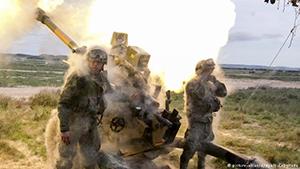 The risk that an armed conflict will break out between Russia and European NATO members has increased over the past year thanks to the erosion of arms-control agreements and tensions over military exercises, according to the annual Munich Security Report.

The report, released Thursday before the annual Munich Security Conference, which begins next week, analyzed developments in Central and Eastern Europe and determined that the relationship between Russia and its neighbors could “lead to a further deterioration of the security situation in Europe.”

Landmark treaties like the Intermediate-Range Nuclear Forces Treaty, which was signed in 1987 between the U.S. and the Soviet Union, are at risk of unraveling, the report said. Russia regularly accuses the U.S. of violating the treaty, and growing tensions between Russia and the U.S. could cause a serious international conflict.

“While U.S. President Trump’s rhetoric toward Russia may be friendly, large parts of the U.S. establishment see Russia once again as a major adversary,” the report reads.

“In this dire state of affairs, miscalculations and misunderstandings could well lead to an inadvertent military clash.”

The report also notes that Eastern European countries are increasingly caught between NATO members and Russia, and that efforts by the West to integrate some Eastern European nations are failing.

For example, NATO has signaled that there is little chance it will absorb new members despite the fact that Eastern European countries like Bosnia and the former Yugoslav Republic of Macedonia are aspiring to join. The report also says that the European Union’s Eastern Partnership Policy, a European initiative to forge economic ties with former Soviet countries like Armenia, Belarus and Georgia, among others, has “lost steam.”

The conflict in Ukraine, where Russia is accused of assisting armed separatists in areas where pro-Russian groups are fighting for territory, also increases the risk that tensions between Russia and the West will be ramped up, the report says.

The report also examines the first year in office of President Donald Trump, the Brexit referendum in the United Kingdom, and the failures of the liberal international order. The report says that Trump and other likeminded leaders in the West are promoting an illiberal understanding of Western civilization.

“Nationalism is on the rise in many countries. The authority of international bodies is being challenged in various ways. Critical international agreements…are being put at risk or severely undermined while defense spending is increasing in many parts of the world and threatening rhetoric is becoming frighteningly common,” the report reads.

“The world, it seems, is becoming less liberal, less international and less orderly.”