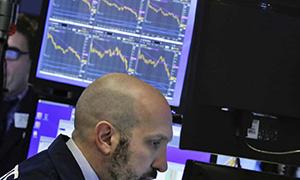 The Dow Jones Industrial Average, which lost more than 1,000 points on Thursday, rose 30 points on Friday morning as the more broadly based S&P 500 and the tech-heavy Nasdaq also moved into the black only to shortly lose those gains. By noon the Dow was down over 200 points and then rallied to end up over 300 points.

Despite the rally, the Dow fell 5% over the week, one of its biggest one-week drops since the recession.

World stock markets have dropped sharply from recent record highs over the past week. The rout started last Friday after the latest US jobs report was released. The report indicated stronger than expected growth in wages, adding pressure on the Federal Reserve to raise rates in order to head off inflation.

In London the FTSE 100 closed down 1%, while Germany’s DAX and France’s CAC also lost ground. The moves came after falls on the Asian exchanges with Tokyo’s Nikkei 225 down 2.3% and Hong Kong’s Hang Seng down 3.1%.

Peter Cardillo, chief market economist at First Standard Financial in New York, said the volatility in financial markets was likely to continue. “This is typical of a market that has not yet fully corrected,” he said. “What we are seeing here is uncertainty and investors selling into the rallies.”

A jump in the yield on 10-year US treasury bonds – a key indicator of inflationary pressure and the likelihood of higher interest rates – appears to be a major factor in the latest sell-off.

Early on Friday morning Congress signed a $400bn short-term funding bill to keep the US government open and Cardillo said that move too was likely to add to volatility. The general economy remains robust with strong jobs growth and corporate earning. “But what has changed is that the president has signed a new stopgap bill to reopen government and with that comes a price – a lot of spending. Markets are fearful that increasing deficits mean a more hawkish Fed.”

The deal comes after Donald Trump pushed through an overhaul of the US tax system that is expected to cost $1.5tn. The non-partisan Committee for a Responsible Federal Budget calculates that the new funding deal adds $420bn with interest to the national debt over 10 years and that if it and the tax cuts are extended, the US’s annual deficit is on course to reach $2.1tn by 2027.

Marc Goldwein, senior vice-president of the Committee for a Responsible Federal Budget, said the US government was “playing with fire”.

In the near term he said it was hard to speculate what drove “every bump and bounce” in the markets but that increasing deficits over the long term were likely to have major ramifications for the stock market and the wider US economy.

“These kinds of debt level are unsustainable,” he said.

Stock markets are now 10% down from the highs they reached in late January – a drop known as a correction. Markets would have to fall another 10% for them to enter a “bear market” where pessimism outweighs optimism in the financial markets.