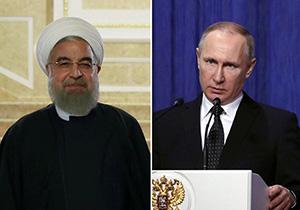 Iran sent the drone into Israeli airspace Saturday in order to signal Israel that it will not accept further Israeli strikes against Iranian targets in Syria.

The dispatch of an Iranian drone into Israeli airspace and the subsequent punishing Israeli air strikes in Syria Saturday amount to a tangible escalation in Iranian-Israeli confrontation. But neither side appears to want full-scale war right now – and Russian diplomacy may help defuse the situation.

Iran sent the drone into Israeli airspace Saturday in order to signal Israel that it will not accept further Israeli strikes against Iranian targets in Syria, according to Tel Aviv University Iran specialist Meir Litvak.

“They are trying to set a redline for Israel. They are saying we can go into your territory and attack you so stop doing what you are doing to us,” he said.

In Litvak’s view, the Iranians are intent on continuing to establish military bases in Syria. He notes that Iranian generals are referring to the Mediterranean as Iran’s western strategic border. “It’s a question whether the Iranians are only interested in deterring Israel, or some elements in Iran are looking for a semi-war situation of engaging proxies in Syria against Israel – of turning the Golan Heights into another front,” he said.

Whatever is the case, the drone is, according to Israeli assessments, seen as upping the ante after Tehran established bases in Syria, kept deploying militiamen there and established major weapons manufacturing facilities. “Each time they did that Israel hit some of these bases surreptitiously with neither side admitting anything. But now Iran has openly defied the rules by sending the drone, so Israel hit back forcefully,” says Gabriel Ben-Dor, a University of Haifa Middle East specialist.

In Litvak’s view, the Iranians do not want a full scale war in Syria now, in part because the civil war there – in which they are backing the Assad regime – is not over yet, and their Hezbollah ally is still bogged down in the fighting. “Their thinking is: let Hezbollah go back to Lebanon, let’s regroup and reorganize and then go to the next phase. Now it’s too early.”

Low-intensity conflict, in which they use Shi’ite militiamen attacking from the Syrian side of the Golan Heights, “is much better for them than full scale war,” Litvak said.

BEN-DOR EXPECTS Saturday’s developments to trigger intensive Russian diplomacy to find a formula on the Iranian presence in Syria acceptable to both Israel and Iran. In his view, Russia should not be seen as being closely aligned with Tehran, having its own concerns about Iran becoming too powerful in Syria.

Israel’s intensive bombardments Saturday would not have been possible without Russian acquiescence, he believes. And the Russian Foreign Ministry’s statement on Saturday’s escalation did not condemn Israel.

“We urge all parties involved to exercise restraint and avoid any actions that could lead to an even greater complication of the situation. We consider it necessary to unconditionally respect the sovereignty and territorial integrity of Syria and other countries of the region,” the statement said.

Ben-Dor said: “The Russians found Iran useful as allies in the fighting but don’t want to see them as a huge regional power controlling Syria. They want an accommodation in Syria in which the regime, some of the rebels and Israel will somehow coexist. The Iranians have the most animosity and the highest propensity for violence, which is something the Russians dislike at this point.”

According to Ben-Dor, the Russian diplomacy would have to address Israeli concerns in terms of not allowing massive Iranian construction of offensive weapons in Lebanon and Syria, and Iranian bases would have to be moved as far as possible from the Golan Heights. Iran, for its part, would get legitimacy for its presence in Syria as one of the main peacemakers, and that they must be taken into account in a future accommodation.

Israel will have to accept some Iranian presence in Syria, Ben-Dor says. “It depends how many bases and what kind. Israel won’t be able to drive Iran out of Syria because Iran has been fighting in Syria on the winning side and it is not possible to deny them fruits of victory. But the level of their equipment and offensive capacity in Syria will have to be controlled to some extent because otherwise it will be too threatening for Israel.”

Litvak agrees the Russians may help provide a way out of the crisis – for now. “I’m not sure the Iranians want a full scale escalation and neither do we… Maybe both sides will find it easier, with Russian pressure, to cool down.

“But I don’t think Iran will stop building up its military presence because of the Israeli strikes, because [Israel has] been doing it for a year and it hasn’t stopped them,” he added.

“Eventually, we may find ourselves in a war because we want to stop them, they don’t want to be stopped, we raise the stakes, they raise the stakes and yes, that could lead to war,” Litvak said.

US hurts whomever it claims to be on its side: Global Times editorial