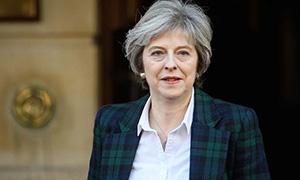 Theresa May is facing a growing revolt among party donors, with one senior backer warning that the Tories will be “decimated” at an election unless the prime minister ends her indecision and shows leadership.

With mounting accusations across the party that May is dithering over Brexit and lacking an inspiring domestic agenda, Sir John Hall, the former owner of Newcastle United, told the Observer that the prime minister was facing a make-or-break period of her premiership.

The north-east businessman, who has given the Conservatives more than £500,000 since 2007 and helped fund May’s snap election, said the prime minister needed to make clear where she wanted to take the country, even if doing so led to her removal.

“It is up to Theresa now to convince everybody that she can be the leader who can stay. I think that’s the way most people in the party are looking at it. Show us your leadership. This is the time to stand up and show it.”

He added: “If we tried to change the leader now, would there be a danger of having to have an election? If we had an election, I reckon we’d be decimated. To me as a donor, the Conservative party has to look at itself in terms of where we’re going. She has got to stay, in my view, to such time that someone else comes forward. A new leader has to emerge – or she has to come through very strongly.”

The Observer has been told other senior Tory donors have become increasingly frustrated. Some who backed Remain are particularly concerned at the government’s performance during the Brexit negotiations. “It has been like a Premier League team playing their best against Tranmere Rovers playing their worst,” said one senior backer.

May will attempt to deal with the accusations of indecision by making her long-awaited speech on her Brexit plans in three weeks’ time. She will deliver it after senior ministers set out Britain’s “road to Brexit” in a series of keynote speeches, beginning this week with Boris Johnson, who will attempt to make the case for a “liberal Brexit” designed to reassure Remain voters, followed by an address by May on security co-operation. Brexit secretary David Davis and trade secretary Liam Fox will also give speeches, but chancellor Philip Hammond and home secretary Amber Rudd – the leading advocates of a soft Brexit – have not been included. David Lidington, the Cabinet Office minister who campaigned for Remain, will give an address.

May’s allies said the speech would reveal more about the degree to which she wants Britain to diverge from EU rules. The speech will take place after senior ministers gather for an away day in Chequers, the prime minister’s country retreat, to hammer out a position they can all accept.

Concerns increased last week as government sources said little had been decided after two cabinet Brexit committee meetings designed to find a common position on leaving the EU. Britain’s relationship to the customs union remains a major sticking point. Attempts to find a solution tha removes the need for a hard border in Ireland have been deemed “unworkable” by some in government.

Hall said he was concerned by the lack of a domestic agenda and called on May to back “capitalism with a social conscience”. Having voted for Remain, he also said he would now back May walking away from Brexit negotiations if she believed the EU was trying to “blackmail” Britain.“When things are against you and you are carrying forward a lot of problems, which she has done, it may be time [for a new leader], but I’m not inside the party,” he said. “The way things are going at the moment, I am horrified at the way that we are destroying ourselves from within. I’ve seen it before with John Major’s government. We cannot have that.

“She’s got to convince myself as a donor that in a sense, she is going to take the party forward so we can get another four or five years. I’m thinking, ‘where is the party going to go’? They have to convince me they have the balls to win the next election. Labour does not have a big lead in the polls. It’s all to play for.”