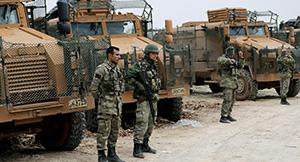 ANKARA (Sputnik) – At least seven Turkish servicemen were killed on Saturday during the operation in Syria’s northern district of Afrin, the Turkish General Staff said.

“Two more our comrades-in-arms were killed on February 10 during Olive Branch operation, and four were injured. Eleven members of the PYD [Kurdish Democratic Union Party], the YPG [Kurdish People’s Protection Units] and IS [Daesh] terrorist organizations were killed,” the statement said.

Turkey launched its operation Olive Branch in Afrin on January 20. Ankara has said its offensive is aimed at clearing the Turkish border with Syria from the terrorist presence. Turkey considers the YPG and the PYD to be linked to the Kurdistan Workers’ Party (PKK) listed as a terrorist organization by Ankara.

Turkey has neutralized over 1,000 Kurdish militants since the start of its Afrin offensive. At least 26 Turkish servicemen were killed and over 70 were injured during the operation. Damascus has expressed its opposition to the Turkish operation in Afrin, slamming such actions as violation of Syrian sovereignty.