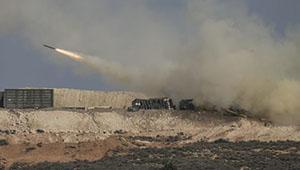 The Turkish military stated on Saturday that 12 soldiers were killed during an operation in the Afrin region of Syria, including two soldiers who died when a helicopter crashed, the Cumhuriyet daily reported.

According to the statement, 11 soldiers were also injured during the clashes. The Turkish military stated that a total of 1,480 terrorists have been killed during the operation.

The Evrensel daily reported that 32 Turkish military members have been lost since the beginning of the operation three weeks ago.

The Turkish military and Free Syrian Army (FSA) fighters on Jan. 20 launched Operation Olive Branch in the Afrin region of Syria against the Syrian Kurdish Democratic Union Party (PYD), which Turkey sees as the Syrian extension of the outlawed Kurdistan Workers’ Party (PKK).

A Turkish military helicopter on Saturday crashed in Hatay province during an ongoing military operation across the border in the Afrin region of Syria, the state-run Anadolu news agency reported.

According to Anadolu the T129 ATAK helicopter was shot down in the southeastern Turkish province of Hatay; however, Prime Minister Binali Yıldırım said the incident took place in Syria’s northwestern Afrin province.

Yıldırım said it was not certain at this point whether the incident occurred due to an external impact or not. Investigations are ongoing, he said.

The Turkish Armed Forces also confirmed the incident and the deaths, saying the military helicopter had “crashed.”

“They [the perpetrators] will pay a heavy price [for downing the Turkish helicopter],” President Recep Tayyip Erdoğan said on Saturday at a ruling Justice and Development Party’s (AK) meeting in İstanbul.