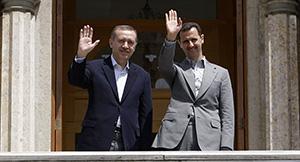 Talks of Ankara and Damascus engaging in direct diplomacy resurfaced after Turkish Foreign Minister Mevlut Cavusoglu claimed this week that Turkey does not pose a threat to the Syrian government.

Serkan Topal, a deputy in the Turkish parliament representing the primary opposition Republican People’s Party and member of the Parliamentary Foreign Affairs Commission, told Sputnik that talks between Ankara and Damascus should happen as soon as possible, because direct contact between Turkey and Syria is a fundamental precondition for reaching peace and restoring a friendly legal environment between the neighboring countries.

“Ankara and Damascus have to put dialogue back on track. I brought the issue to the agenda at a parliamentary session, pointing out that it has to be discussed in the ministerial council. So far, we haven’t received a response with regard to the initiative. But I hope that it will be positive and that we will get it in the closest time,” said Topal, who earlier proposed the creation of a Syrian-Turkish reconciliation committee.

“Concrete steps have to be taken. I’ve said multiple times that a parliamentary delegation has to be formed to establish liaison with the Syrian government. The dialogue has to be revived by creating a joint committee. I believe the process can be launched in the nearest future,” he stated.

Topal underlined that Cavusoglu’s remarks signaled that the time has come for concrete steps to be taken on the part of Ankara toward reviving a dialogue with Damascus.

Onur Öymen, retired diplomat and former Turkish permanent representative to NATO, told Sputnik that the foreign minister’s announcement shows that Turkey has not shut its doors on the regime of Bashar Assad. He stressed that establishing a liaison with the legitimate Syrian government doesn’t mean carrying out direct negotiations with Assad.

“In this case, the parties have to establish a liaison, even if it is not high-level. It has to be done to fill the informational gap, to clear up a possible misunderstanding between the parties in case of unforeseen events on the Turkish-Syrian border, to resolve humanitarian issues, work on civilian protection initiatives. In fact, there are interaction channels between adversaries even at a time of war. No matter how tense relationships between the countries are, I believe that active liaison will be beneficial for both sides,” Öymen said.

According to the former diplomat, establishing liaison between the two countries is “common sense,” despite the current Turkish military incursion into Syrian territory.