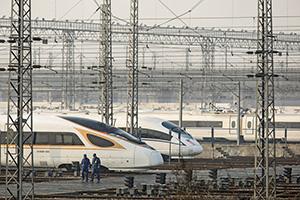 Millions of Chinese cram onto trains to make the annual pilgrimage home for the Lunar New Year holiday. It’s a crowded and often uncomfortable experience that is rapidly being transformed by the country’s push into the world of high-speed rail.

China already has the globe’s longest bullet-train network, but it’s plowing 3.5 trillion yuan ($556 billion) into expanding its railway system by 18 percent over the next two years, to 150,000 kilometers, or more than 93,000 miles.

Much of that will be spent on extending the high-speed network westward, which includes parts of the country that ancient Chinese poet Li Bai once lamented were so mountainous that getting there was as challenging as reaching the sky.

Almost 400 million people — that’s more than the U.S. population — will travel by train over the Lunar New Year, also known as Spring Festival. China’s factories and offices shut down for the week-long holiday, which unleashes the largest migration of humans on the planet. Many of the country’s 1.4 billion citizens return to their hometowns for family gatherings, or, increasingly, are taking the chance to be tourists both at home and abroad.

While the advent of cut-price flights has dimmed the appeal of rail travel in other parts of the world, in China it’s on the rise. Last Spring Festival saw a record 10.96 million trips on one day, and for the first time more people took bullet trains than conventional ones, according to official data.

That will open up the network — which was initially focused on setting up high-speed connections in major economic hubs along China’s wealthier east coast — to the less developed west.

“These lines provide ample capacity during peak travel periods such as the Lunar New Year and in other times can stimulate growth in tourism and other businesses in the service sector in western China,” said Sun Zhang, a railway expert at Tongji University in Shanghai. “High-speed rail will help to bridge economic imbalances between China’s east and west.”

The latest of the westward bullet-train lines opened in December, and connects Chengdu, the capital of Sichuan province, to Xi’an, a city in China’s northwest famed for the Terracotta Warriors.

With a top speed of 250 kilometers an hour, the high-speed rail cuts through the region’s mountainous terrain in a quarter of the time taken by a regular train. The cost — which starts at 263 yuan ($42) for a single-trip ticket — is about half that of a one-way flight.

Chen Gaozhi, a businessman who lives in Xi’an, will travel the route this week. He’s taking a high-speed train back to his hometown in Sichuan just days ahead of the New Year holiday, which starts Feb. 15 this year.

“I’ve always flown back home during the Lunar New Year over the past 10 years, but 70 to 80 percent of the time the flights would get delayed,” Gaozhi said. “The worst experience was four years ago when I had a flight back to Xi’an after the New Year scheduled at six in the afternoon, but the plane didn’t take off until midnight.”

This Spring Festival, people are expected to make an estimated 390 million rail trips in the 40 days starting February, the typical travel period for the holiday. That’s up 8.8 percent from a year earlier, and almost double the 200 million trips made in 2010. Four of the eight high-speed lines going from east to west are already in operation.

The last time Gaozhi took a train back for the holiday was when he was in college, and it took more than 16 hours. This time, he said, “it’ll only take three hours for me to go home.”