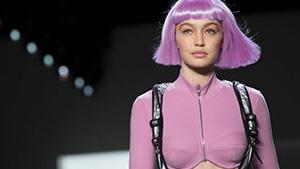 With any fashion week comes the unwarranted body shaming of those involved. Gigi Hadid was the latest model to cop criticism over her fluctuating weight after she walked in both Jeremy Scott and Bottega Veneta’s shows at New York Fashion Week.

But the 22-year-old wasted no time, taking to Twitter to defend herself against rumours that illicit substances played a factor in her maintaining a thin physique.

“Not to judge others, but drugs are not my thing, stop putting me in that box just because u don’t understand the way my body has matured,” she tweeted to her 8.51 million followers.

The model wrote a lengthy series of tweets in which she explained why her body has undergone changes.

Hadid said weight change over the years was likely attributed to being diagnosed with Hashimoto’s disease, which causes fluid retention, during her early career. She also explained she was receiving treatment for the disease, which is occurs when the immune system attacks the thyroid.

“For those of you so determined to come up w why my body has changed over the years, you may not know that when I started @ 17 I was not yet diagnosed w/ Hashimoto’s disease; those of u who called me ‘too big for the industry’ were seeing inflammation & water retention due to that [sic],” she wrote.

“Over the last few years I’ve been properly medicated to help symptoms including those, as well as extreme fatigue, metabolism issues, body’s ability to retain heat, etc… I was also part of a holistic medical trial that helped my thyroid levels balance out.”

Like many women who are the targets of such criticism, Hadid added that she is not happy with how “skinny” she is currently but insists she is healthy: something she constantly is striving to maintain.

For those of you so determined to come up w why my body has changed over the years, you may not know that when I started @ 17 I was not yet diagnosed w/Hashimoto’s disease; those of u who called me “too big for the industry” were seeing inflammation & water retention due to that.

“I have always eaten the same, my body just handles it different now that my health is better,” she tweeted after saying stress and travel also are contributing factors.

I will not further explain the way my body looks, just as anyone, with a body type that doesnt suit ur “beauty” expectation, shouldnt have to. Not to judge others, but drugs are not my thing, stop putting me in that box just because u dont understand the way my body has matured.

“I may be ‘too skinny’ for u, honestly this skinny isn’t what I want to be, but I feel healthier internally and am still learning and growing with my body everyday, as everyone is.I will not further explain the way my body looks, just as anyone, with a body type that doesn’t suit your ‘beauty’ expectation, shouldn’t have to [sic].”

Hadid was quickly met with support, including from fellow model pal Kendall Jenner, who was subjected to pregnancy rumours after posting a photo to social media back in December.

“I just like bagels,” the model tweeted in response.

Can’t wait to see you in Milan. Sorry you too have to explain something so ridiculous to people. Love to you. Love to the people who try to tear down others also because they are just people who haven’t had the spiritual growth that needs to occur to love and accept one another.

This isn’t the first time that Hadid, who is currently dating singer Zayn Malik, has had to defend herself against drug use rumours.

She strongly denied taking any illicit substances at a 2015 Victoria’s Secret party after speculation on US gossip website, Ocean Up.

At the time, Hadid opened up about her battle, shutting down critics by saying she had worked hard naturally to have her healthy body back after her Hashimoto’s disease diagnosis.

“I have lost weight and gained weight,” the model told People during her fitting for the Victoria’s Secret Fashion Show in 2016.

“My weight fluctuates so much,” she continued. “I really didn’t mean to [lose weight]. Like I want boobs. I want my a– back. But it’s not my fault. My weight fluctuates and so does everybody’s and I think that if people are gonna judge, that’s the worst you can possibly do because everybody is different.”