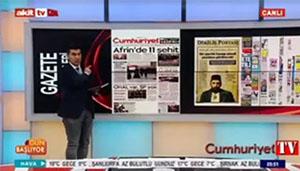 Commenting on a Cumhuriyet report about 11 Turkish soldiers killed on Saturday in the Afrin region of northwestern Syria, Ozan said: “You liked 11. It gave you a rush and you put it in the headline. I wish Turkey was a one-man regime that would close you down in two minutes. I wish Turkey was a Sharia regime that would execute you. I’m saying this clearly: You are all traitors.”

“Democracy is a pretext. It is permissible to kill you during war. Maybe I am being defeated by my rage. You are really dishonest. God condemns you. You are dishonest, undignified. You are atheists. You are crypto Zionists,” added Ozan.

The Turkish military and Free Syrian Army (FSA) fighters on Jan. 20 launched Operation Olive Branch in the Afrin region of Syria against the Syrian Kurdish Democratic Union Party (PYD), which Turkey sees as the Syrian extension of the outlawed Kurdistan Workers’ Party (PKK).

The Turkish military stated on Sunday that 12 soldiers had been killed in the last 24 hours during an operation in the Afrin region of Syria, including two soldiers who died when a helicopter crashed. The Evrensel daily reported that 32 Turkish military members have been lost since the beginning of the operation three weeks ago.

Turkey’s Interior Ministry on Monday announced that 449 people have been detained on terror charges due to their posts on social media critical of the Turkish military incursion in the northern Syrian town of Afrin, while 124 have been detained for taking part in street demonstrations protesting the operation.

Lavrov: Moscow Will Definitely Respond to Any Sanctions Imposed by the US