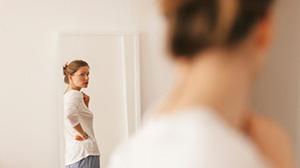 The mystery of “body dysmorphia” has long troubled people working with sufferers of eating disorders such as anorexia and bulimia.

But Australian researchers are starting to understand how dangerously underweight people, for example, can look in the mirror and genuinely believe they are fat.

It’s all about the brain’s visual adaptation system, says Ian Stephen of Macquarie University. He’s the co-author of a recent report in the Journal of International Medical Research on the emerging research area.

“The story goes that you see a lot of idealised, thin women’s bodies in the media and that makes you think that you’re fat,” Dr Stephen said.

“That link’s pretty well established … but there hasn’t been much of an explanation as to why that link exists. We’ve been looking at visual adaptation as a potential mechanism for that.”

Examples of visual adaptation can be found all over the visual system, from how people perceive colour, to light levels, tilt, movement and size. It’s the cause of most optical illusions; for example, if you stare at a piece of red paper and then glance at a white wall, the wall may appear green, or if you enter a room with very yellow light, you’ll eventually stop noticing it.

That’s because your visual system adapts, or calibrates, according to the new point it determines as “normal”, Dr Stephen said.

Researchers believe a similar thing is happening when people are exposed to, and especially fixate on, extreme body types.

A University of Western Australia study published in January found the visual adaptation system causes people to “average out” what they see over time.

When most people seen are overweight, it follows that most individuals tend to underestimate their own weight.

But that doesn’t take into account how people with poor body image look at other bodies.

In the study Dr Stephen co-authored, participants were asked to rate their body satisfaction before going through a series of exercises in which they manipulated images of bodies to make them look as “normal” as possible. They were then exposed to more images of bodies at both ends of the size scale, and their eye movements were tracked, before they were asked to manipulate images to look “normal” again.

The researchers found participants with low body satisfaction gave more of their attention to thinner bodies, and were then more likely to decrease the size of what they considered “normal”.

It’s the first study to identify the level of attention directed at thin bodies as the key link between individuals’ satisfaction with their body and the extent to which they misperceived their own weight – and it supports the theory that body dysmorphia is linked to visual adaptation, Dr Stephen said.

For Amy*, 27, who has suffered from symptoms of body dysmorphic disorder (BDD) since the age of 10, it’s a “constant battle” against the urge to fixate on thin women’s bodies.

After attending a performing arts school full of ballet-thin girls, she now works in an industry that revolves around fashion and beauty, which makes it difficult.

“When you look at other women you instantly compare your bodies to theirs,” Amy said. “I have to force myself not to look – sometimes looking past them into the distance on the street to avoid seeing them.”

Robyn, 36, said she was also constantly in comparison-mode when she suffered from anorexia and bulimia as a teenager.

It was less about looking at pictures of models in magazines, she said, and more about “comparing myself with a crazy ‘I’m fat’ lens to other people in my life and on the street”.

“I always have said there was something wrong with the pathways in my brain. I saw, I mean really saw, what wasn’t there.

“It was the weirdest thing. I now see pictures of myself back then, and I was a skeleton, but I genuinely saw so much fat on me.”

Clinical psychologist Ryan Kaplan, from Sydney BDD and Body Image Clinic, said it’s important for people to recognise if they are spending a lot of time focusing their attention on bodies that represent their “ideal”, and engaging in negative self-comparisons.

“An appropriately experienced and qualified psychologist can work with people to help break these cycles,” he said, adding that the media had a role to play in the value it placed on beauty and thinness.

“It would be terrific if there was less focus in the media on people’s bodies and physical appearances, and more of a focus on … the sorts of personal qualities and characteristics that truly matter,” Dr Kaplan said.

For body-positive advocate Ally Garrett, the answer is not switching off. Instead, people should think about implementing a balanced “visual diet”.

“Adding some diversity and shapes and colours and sizes and ages to places like your Instagram feed or the images you consume, it’s a really good way to remind yourself that there are lots of different types of bodies out there.”

Along with psychological treatment for her underlying mental health issues, Robyn said consuming positive images of women of all sizes had helped her stay on track.

“Why is skinny the only beautiful? And the only representation? Also the most important thing for women is being beautiful – that has to change. With treatment, I think seeing beautiful people of all body shapes eating well really helped me.”