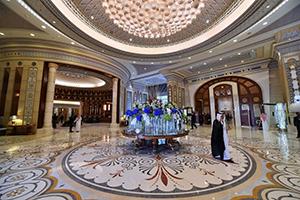 The Ritz-Carlton in Riyadh has reopened for the public after acting as a detention center for Saudi Arabia’s richest men.

Authorities locked up dozens of princes, officials and billionaires in the palatial hotel for about three months in the government’s declared crackdown on corruption. The first phase of the purge ended last month, with officials reaching settlement deals valued at more than $100 billion with many of those held in return for not pressing formal charges against them.

Word of the hotel’s return to normal service, however, seemed slow to spread.

At around 10 a.m. on Sunday, not a single car was seen in the expansive garden outside the hotel. The lobby was almost empty, except for a couple sitting at one table.

The management declined to discuss occupancy levels. Customers could book rooms starting from Sunday, with a Deluxe room going for as low as 2,439 riyals ($650), according to the hotel’s website.