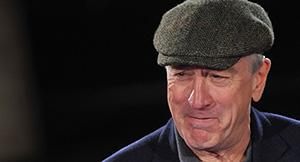 De Niro has repeatedly criticized the Trump administration and last year attended the We Stand United protests in NYC.

“I am talking about my own country, the United States of America. We don’t like to say we are a ‘backward’ country so let’s just say we are suffering from a case of temporary insanity,” actor Robert De Niro said at the World Government Summit in Dubai, the United Arab Emirates.

He further went on to blast the Trump administration’s stance on climate change as the US president decided to withdraw from the Paris deal, making the United States the only country to pull out of the accord.

The actor reportedly received applause and laughs when he said the US “will eventually cure itself by voting our dangerous leader” out of office.

De Niro’s remarks have prompted discussions on Twitter, with many Twitter users pointing to the hypocrisy in De Niro’s remarks, saying that the Trump administration has nothing to do with problems the US has been facing.

However, some social media users lauded the renowned actor’s speech.

Most Hollywood actors and other celebrities, who had supported Hillary Clinton in the US presidential election, have repeatedly criticized President Donald Trump during major show business events, such as the Grammys, which used to be far removed from politics.