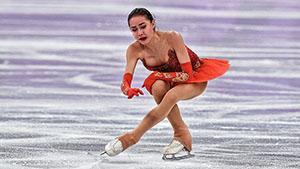 The Russians won the silver medal in the team figure skating event, receiving 66 points by the end of all seven events held on Monday. Canada won the competition with 73 points. The US secured bronze at the pedestal with 62 points.

The team figure skating competitions finished with the ice free dance program, in which Russia’s Ekaterina Bobrova and Dmitri Soloviev scored 110.43 points, securing third place in the segment. The Canadian performance topped the list with 118.10 points, followed by Americans with 112.01.

But Russia’s second silver in the Olympics was inevitable after a flawless performance in the women free skating event. American Mirai Nagasu, who skated before Zagitova, set a high bar for all of her opponents by flawlessly executing all jumps in her program, including a triple axel, scoring 137.53 points in the women’s free skate event.

Zagitova’s performance was however immediately criticized by American skater Ashley Wagner. “It’s not a program. She killed time in the beginning and then just jumped the second half. It’s not a performance. I understand that this is what the system allows but it’s not all figure skating is about,” she said on Twitter.