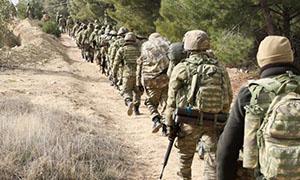 “Our Muslims soldiers are undertaking their fight in line with Islam’s principles. That is why they are moving slowly in Afrin. They are moving with the conscience of not causing even one person’s nose to bleed; after all, this is Islam’s order,” Erbaş said on Feb. 10 during a speech at the Orhan Gazi Culture Center in the western province of Sakarya’s Adapazarı district.

“All our conquests in history were undertaken to prevent oppression. Our soldiers fire their bullets against oppressors, to protect those oppressed. Our soldiers are clashing for this, because there are terror organizations there, and they are constantly oppressing,” Erbaş said.

Speaking about the “exploitation of Islam by various groups like Boko Haram, al-Shabab, the Islamic State of Iraq and the Levant [ISIL] and the Fethullahist Terrorist Organization [FETÖ],” he said they can be tackled by giving people the “right knowledge on religion.”

“If we do not undertake our duties at this point, then we will face groups that are promoted as religious formations but which later turn into terror organizations. How did ISIL, Boko Haram, al-Shabab, and FETÖ show up? They did through incorrect interpretations of religion,” he said.