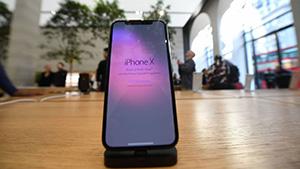 Surprisingly, after a decade of growth, the global smartphone market came to a standstill in 2017.

BEIRUT: It comes as no surprise that companies have reached peak smartphone.

Every year, phone makers seem to be squeezing more screen into the same phone, cameras keep improving, both in quality and number.

Many in the smartphone business and tech enthusiasts expected Apple’s 10th anniversary of the iPhone or the release of the Samsung Galaxy S8 to blow the market right open and bring about the latest crop of super cycle of upgrades.

Surprisingly, however, after a decade of growth, the global smartphone market came to a standstill in 2017.

According to latest estimates from market research firm IDC, a worldwide total of 1,472 million smartphones were shipped in 2017, virtually unchanged from the 1,473 million units shipped in the previous year.

“With smartphone penetration reaching saturation levels in many regions and technological advances becoming rarer and less obvious to the average user, it was only a matter of time before the market reached this point,” the report from IDC said.

The question at hand remains; does this imply the start of a downhill cycle from this point on?

The fact that shipments declined by a more significant 6 percent in the fourth quarter of 2017, could be seen as a sign for worse things to come in 2018.

“With ultra-high-end flagships, all the rage in 2017, many of these new bezel-less wonders proved to be more of a luxury than a necessity among upgraders”, the report said about the iPhone X and other recent smartphone releases.

Trying to convince consumers of paying even heftier prices for the latest, and supposedly, greatest devices could be the best if not the only way for Apple, Samsung and the like to maintain a level of growth going forward.

“The reality is simple, people don’t necessarily need an upgrade on their smartphones every year, or every other year, since phones are slowly becoming sturdier,” Mahmoud Ahmad, a local smartphone specialist, and tech-enthusiast told Annahar.

Ahmad, who also owns and runs a smartphone shop in Hamra, considers that people holding on to their phones is better for their budget, not to mention the environment, which means that “both the end user and phone makers need to start thinking of them as just like any other invention.”

Globally, smartphone shipments grew just 1.6 percent, the smallest increase ever. Back in 2015, people replaced their phones after 23.6 months, on average, according to research firm Kantar Worldpanel; by the end of 2017, that number increased to 25.3 months.

Signs of this number increasing in the future aren’t so farfetched.

In December, when news broke out that Apple was intentionally slowing down phones with worn-out batteries, consumers lashed out at the company. Apple responded by offering discounted prices for battery replacements for everyone from $79 to 29$, atoning for its sin.

This shows how many people would rather repair their existing phones than buy new ones. The report by IDC noted, however, that the discounted battery replacements cost Apple an estimated $10 billion in lost sales.

“Are smartphones across the board valuable longer to people? The answer is definitely yes,” Ahmad asked, “are the devices sufficient to take care of people’s need today? Pretty much.”

One major driver of the change in people’s behavior is that phones now mostly look alike, according to Ahmad. “A longer phone life cycle is also a compliment to Apple and Samsung, even if some investors don’t love it,” he highlighted, adding that it’s a sign that their products are reliable and less susceptible to wear and tear.

Ziad Mansour, a computer science graduate, and owner of a retail phone store in Ashrafieh considers that slowing down the yearly upgrade cycle for smartphones wouldn’t exactly represent the demise of Apple or Samsung.

“Prices for new and upgraded smartphones currently break the bank, such as the iPhone X’s beefy price tag, while considering a sort of add-ons such as Samsung’s Gear VR, Apple’s HomePod, or Google Home being added to the mix,” Mansour told Annahar.

He highlighted, however, that more and more people holding onto their phones for longer periods could make the industry look a lot more like that of laptops and computers.

“Don’t get me wrong, people will always upgrade their phones as a projection of their personality or because they will always be hungry for the latest piece of tech,” both Mansour and Ahmad highlighted to Annahar.

Both phone vendors consider the “FOMO factor,” or fear-of-missing-out on new innovations, to be the driving force behind the high demand of year-to-year cycle upgrades.

According to the latest data from Hyla Mobile, the average retiring phone in 2017 had been in use 78 days longer than the year before – now up to a total of 2.59 years.

Jaber finds that a major leap in battery performance would be at the top of most people’s most-wanted lists, but there are many scientific hurdles to conquer. The next big upgrade moment, in a few years, will probably be for phones capable of supporting 5G Internet speed, bringing mobile data to become hyped up on steroids

Smartphones will probably hum along for years like laptops have done with the rise of smartphones and tablets, and someday there will be a totally new technology that will capture people’s dollars.