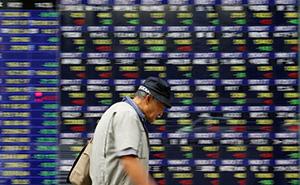 The stock market has been backsliding this week, erasing 2018’s gains and recording the two largest single-day declines in points ever. By the closing bell on Thursday, the market officially fell into a correction. What does that mean?

A “correction” occurs when the market drops 10 percent from a previous high. On Thursday, both the Dow Jones industrial average and the Standard and Poor 500 entered correction territory.

The 10 percent correction threshold is somewhat arbitrary but it’s halfway to a “bear market,” which is denoted by a 20 percent decline. It’s also nothing to worry too much about, economists told Newsweek.

“We’re seeing a bit of normalization,” said Kenneth Rogoff, a professor of economics and public policy at Harvard University.

Rogoff said the market has been on a “crazy” upward climb over the past year and is simply re-adjusting to news about expected federal interest rate hikes. The Federal Reserve is planning to begin gradually raising interest rates this year now that the economy has shown stable growth and appears healthy enough to handle it.

It’s those planned rates increases that the market is reacting to, he said. “A substantial part of this correction comes from a fear that interest rates will rise much more sharply than markets were expecting,” Rogoff said. “This is really plain vanilla fear over Federal Reserve tightening.”

But the fact that the Fed believes the economy is stable enough to begin raising interest rates is a positive reflection on the health of the U.S. economy. “The overall economic picture is very good and looks to be very good for 2018 and probably 2019,” Rogoff said.

Joe Brusuelas, chief economist at the investment firm RSM in New York, said investors see the Fed’s plan as the “end of the era of easy money.”

Brusuelas said the drop is ultimately a good thing, a course correction for the stock market. “Corrections such as this over time put the market on a more sustainable path,” he said.

The drop, while painful to investors jumping onto the bull market late, is not too alarming given the economic climate, Rogoff said. “So far, it’s hard to view this with alarm,” he said. “I wouldn’t quite say the party’s over but its toning down a bit.”