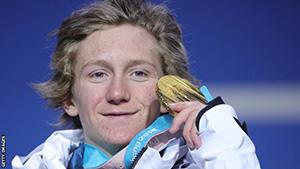 Teenager Red Gerard snatched a dramatic victory in the men’s slopestyle to win the United States’ first gold of the Pyeongchang Winter Olympics.

“I cannot believe what has just happened – it is insane,” said Gerard

Austrian David Gleirscher was the surprise winner of the men’s luge and Norway’s Simen Hegstad Kruger won the men’s skiathlon despite an early fall.

The blustery weather meant the women’s slopestyle and men’s downhill skiing had to be rescheduled.

At 17, Gerard is the first Winter Olympic champion to be born this millennium. He does much of his training in a facility built by him and his older brothers in the back garden of his family home in Colorado.

In tricky conditions he made mistakes in his first two runs, but produced a clean final effort which was well rewarded by the judges.

Victory for Gerard, who was just 13 when Sage Kotsenburg won slopestyle gold for the US at the 2014 Games, means he is the second-youngest man to win gold in an individual event at the Winter Games, after Finnish ski jumper Toni Nieminen. He won the individual large hill event in 1992, aged 16 years and 261 days.

Until late in the final run, it had looked as though Sochi bronze medallist McMorris would take an emotional gold medal, less than 12 months after a near-fatal crash.

Last March he suffered a fractured jaw, left arm, pelvis and ribs, ruptured spleen and a collapsed lung after colliding with a tree.

He led with a score of 85.20 from his second run, but both Gerard and Parrot bettered that score.

“I don’t want to think too much about the past today, but I appreciate the fact I’m here on my snowboard,” said McMorris.

“I need to pinch myself because now I feel so good and comfortable on my board, but eight months ago I probably didn’t think I was going to be able to snowboard at this level ever again.”

Jamie Nicholls, Billy Morgan and Rowan Coultas all fell in qualifying on Saturday, meaning there were no Britons in the final.

Kruger’s Olympic debut got off to a poor start when he fell early in his race, breaking a ski pole, but he recovered to rejoin the rest of the field before breaking away on the penultimate lap, going on to win by eight seconds

“I don’t know what happened – I had two guys over me and one broken pole,” said Kruger.

“I just had to try to stay calm. I was really tired after the classic part, but as soon as I changed skis, suddenly my legs felt great again and I knew that all the possibilities are now open again and I just tried to start fresh.

“I knew the skating part is my strongest part and I just had to go for it and don’t look back.”

While the men’s slopestyle event was completed, women’s qualifying was cancelled before an athlete was able to complete a run because of strong winds.

As a result, all athletes have progressed to Monday’s final, which begins at 01:00 GMT, and will compete in two runs rather than three.

The weather had earlier caused the postponement of the men’s downhill, one of the major events of the Games.

Other news lines on day two