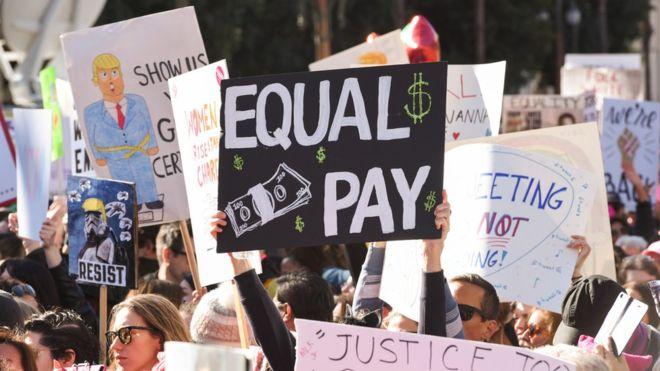 As countries around the world grapple with the gender pay gap, some places in America have come up with a new way to tackle the problem.

Their solution? Bar employers from asking job applicants what they currently earn, so new salary offers are not based on the previous figure.

Laws are already on the books in a handful of jurisdictions, including California, Massachusetts, New York City and Puerto Rico. Similar measures are under consideration in more than 20 other states, as well as at the national level.

The aim is to stop a hiring practice that critics say perpetuates the pay gap, since women often start out with lower salaries.

“What these bans are doing is ensuring that employers pay employees for the job they have to do,” says Kate Nielson, state policy manager for the American Association for University Women, which supports the new laws.

“There is a real attraction to this kind of policy because it is proactive.”

The US has officially banned unequal pay for equal work since 1963, but what counts as equal can be controversial, as highlighted by recent rows in the UK at the BBC and Tesco.

And unlike the UK – which now requires large companies to report publicly on pay by gender – the Trump administration recently suspended a rule that would compel firms to report similar data to the government.

People who campaigned for the law in Massachusetts – which became the first place in the US to approve such a rule in 2016 – said they think the idea has caught on because it is simple and does not punish firms retroactively.

“Instead of taking the traditional approach… we wanted to actually create new standards to make sure that employers and businesses were being proactive,” says Sasha Goodfriend, president of the Massachusetts chapter of the National Organization for Women.

“It sometimes needs to be redefined in a new way to reignite an age-old conversation.”

On average, women in the US earn about 80% of the amount paid to men – roughly comparable to the UK, according to government statistics. For black and Hispanic women, the gap is even wider.

Some of the difference is due to factors like occupation or part-time work.

Yet even after allowing for this, women just one year out of college earned about 7% less than men, a gap that widens over time, according to research by the American Association for University Women.

Aileen Rizo, 43, who coached math teachers for a school district in California, said she had not considered the link between the pay gap and salary inquiries – until she encountered it herself.

In 2012, she confronted her employer after learning her pay was lower than that of co-workers in the same role.

The district said the difference was due to a policy that set salaries based on prior pay, not gender discrimination.

“If you always look at my prior salary, I could never break that barrier,” says Ms Rizo, who eventually filed a lawsuit.

The dispute has not yet been finally resolved, but her case helped to galvanise support for new equal pay laws in California, including the ban on prior pay inquiries.

“I think maybe it’s the right time,” Ms Rizo says. “The culture is shifting and women are finding their voice and finding empowerment.”

The rules require a sea-change in hiring practices, especially for white collar fields.

About 95% of more than 100 large and mid-size employers surveyed by human resources consulting firm Korn Ferry in November said they asked about candidates’ pay histories.

In some cases, she says firms also use salaries to screen candidates, interpreting high pay as a proxy for competence and responsibility.

“They think it’s an objective number when it’s anything but,” says Ms Donovan, who pushed to include the ban on prior pay queries in the Massachusetts law.

“The dirty little secret in hiring, is for the most part we pay people what they’re willing to accept.”

In liberal Massachusetts, advocates worked carefully to get business support for the proposal.

In Philadelphia, the local Chamber of Commerce even sued on behalf of employers that included Comcast, charging that the measure violated free speech grounds, a case that is still being litigated.

As the idea gains traction, however, companies are starting to adjust, says David Woolf, a Philadelphia-based partner at the law firm Drinker Biddle, who works on employment issues.

“I don’t mean to suggest they like it,” he says. “It’s just the reality now.”

Ms Donovan and other supporters said they are hopeful the rule is a step toward companies setting salaries based on the job, not the person, noting research that has found women tend to negotiate less and are less successful when they do.

Companies are asking candidates how much they want to get paid as a “fallback” says Mr Woolf.

And if anything, the new rules are likely to prompt pay discussions to start earlier in the hiring process, says Paul McDonald, senior executive director at the staffing firm Robert Half.

Peter Cappelli, director of the Center for Human Resources at the University of Pennsylvania’s Wharton School, says he thinks the legislation could have other unintended consequences.

For example, if job candidates don’t volunteer salaries during the discussions, firms are likely to assume their pay is lower than it is.

Mr Cappelli says this effect is likely to be especially pronounced for women and other groups that are statistically likely to have lower pay.

“The phrase for this is statistical discrimination,” he says. “Now we’ve got this quirky situation where it’s actually likely to make things worse.”

Advocates say it will take a few years of job switching and hiring before they can say whether the measure is meeting its goal.

They are not the only parties optimistic about change, however.

About two-thirds of companies surveyed by Korn Ferry said they expect the legislation to improve pay equity at their firm by at least a small extent.

Bob Wesselkamper, global leader of awards and benefit consulting at Korn Ferry, says many US companies have not examined the issue in recent years and may be overestimating the legislation’s effects.

Even with that caveat, he adds: “I firmly believe that there will be organizations that will benefit … and become a more fair and equitable environment because of this legislation.”

Ms Rizo and others add that they know this idea is not a silver bullet.

They’re also pushing for better accommodations for pregnancy, stronger sexual harassment laws and paid family and sick leave, which is not a national requirement in the US.

“I’ve seen a lot of progress,” says Ms Rizo. “There’s still a lot of work to do”