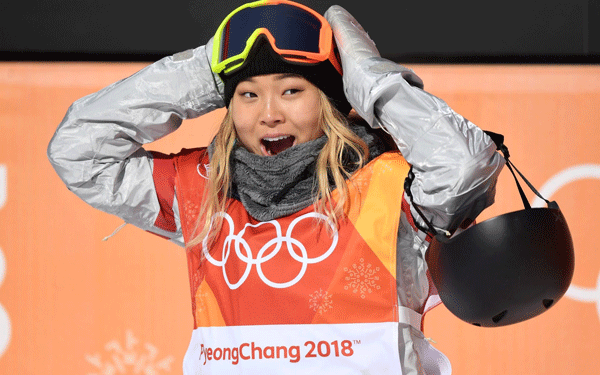 With tears of joy and a wonderfully giddy expression that suggested she could not quite believe what was happening, Chloe Kim looked as flummoxed as any 17-year-old would if they were plonked on the top of an Olympic podium.

In some ways Kim is just like any other young woman her age – she tweets about her love of junk food, she listens to Lady Gaga and she loves to dance.

Only Kim could not be further from a normal teenager because she does all of that at the same time as winning Olympic gold. Literally.

During halfpipe qualifying on Monday she pulled her phone out between runs and tweeted: “Could be down for ice cream”. The following day, she had one run remaining in the final when she did the same thing, telling the world: “Wish I finished my breakfast sandwich but my stubborn self decided not to and now I’m getting hangry.”

Then she stuffed her phone in her pocket, did a little dance at the top of the run, put her earphones in and produced the greatest run in the history of Olympic women’s halfpipe.

Just 5ft 3in and not yet out of high school, Kim has already been described as many things. To many people – including her immigrant father Jong Jin – she is the embodiment of the ‘American dream’. She is also the future, not to mention a distinctly modern present, of snowboarding.

Some are already calling her the greatest female boarder of all time. In fact, it would not be a stretch to suggest she just might be the future of winter sport.

If that all sounds a little like hyperbole or a rash statement in the emotional wake of one moment of brilliance then think again. Kim’s time has been coming.

Sponsored by the world famous snowboarding brand Burton since the age of 11, she was good enough to compete at the Sochi Olympics four years ago when she qualified for the American team but was denied her spot due to age regulations prohibited a 13-year-old from competing.

She won her first X Games title aged 14 and a year later became the first woman to land back-to-back 1080 spins – a double move requiring such power and skill that none of her rivals can match it, and one which she performed in her final run on Tuesday  to score a phenomenal 98.25 points when the gold medal was already hers.

By way of demonstrating her superiority over her rivals, second place was won by China’s Jiayu Liu with a score of 89.75 and third went to American Arielle Gold with 85.75. Over the course of the two days of competition, Kim posted the four highest scores.

To be frank, she is in a league of her own and the numbers only tell half the story. The dynamism, the agility and the ease with which she made it all look left everyone in attendance in awe. Even her rivals talk longingly of wanting to feel what Kim feels when she flies through the air.

That her moment of glory should come in Pyeongchang of all places made her victory even more remarkable.

It was in 1982 that Kim’s father Jong Jin emigrated from South Korea and moved to California in the search for a better life, working a series of minimum wage jobs just to get by.

Born and raised in the United States, but fluent in Korean, Kim was only introduced to the sport when her father used her “as a decoy to get her mother to learn to snowboard.”

The initial plan failed, but it unintentionally sowed the seeds for what happened  on Tuesday  when 20 family members gathered on the most beautiful sun-drenched morning and Kim put the finishing touches to a masterpiece that had been 36 years in the making.

“My dad has sacrificed a lot for me,” she said afterwards. “I don’t know if I could quit work and travel with your kid full time, leaving your wife behind and chasing after this dream because your kid is really passionate.

“I did it for my family and everything they’ve done for me.

“It means a lot just being able to do it where my family is from.

“This is the best outcome I could ever ask. It’s been such a long journey and just going home with the gold is amazing.”

Then she stated her desire for a Hawaiian pizza and pretended to sing into the microphone while waiting for her answer to be translated for the local media.

So yes, she is a typical teenager. But she is a teenager with a fearless attitude, a phenomenal talent, a magnetic personality and a desire so strong that she forced herself to produce that 98.25-point run even though gold was already guaranteed, “just for me to show myself I could do it.”

There is not a lot normal about that.